Baal and the Politics of Poetry 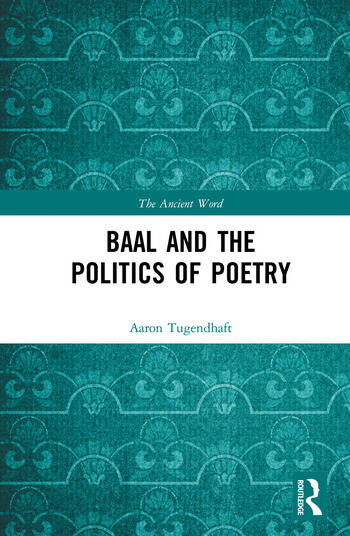 Baal and the Politics of Poetry

Baal and the Politics of Poetry provides a thoroughly new interpretation of the Ugaritic Baal Cycle that simultaneously inaugurates an innovative approach to studying ancient Near Eastern literature within the political context of its production. The book argues that the poem, written in the last decades of the Bronze Age, takes aim at the reigning political-theological norms of its day and uses the depiction of a divine world to educate its audience about the nature of human politics. By attuning ourselves to the specific historical context of this one poem, we can develop more nuanced appreciation of how poetry, politics, and religion have interacted—in antiquity, and beyond.

Chapter 1: Baal and the Modern Study of Myth

Chapter 4: The Politics of Time

Aaron Tugendhaft is Collegiate Assistant Professor of the Humanities and Harper Fellow in the Society of Fellows in the Liberal Arts at the University of Chicago, Illinois, USA.

"Aaron Tugendhaft's book comes as a very welcome contribution. For he means to overturn the standard interpretation of the well-known ancient Ugaritic poem about the god Ba'al, which sees it as a myth establishing the kingship of Ba'al in heaven, bringing cosmic order by defeating the enemy deities who would disrupt it. For Tugendhaft, rather, the poem is a meditation on kingship, divine as well as human, and its limitations; it has an open ending, leaving the establishment of a firm sovereignty, whether of Ba'al or another deity, up in the air. Tugendhaft makes a compelling case, which should provoke serious discussion. Based on an insightful scrutiny of the ancient evidence, it is a case that, as he shows, is relevant on a much wider scale as well: indeed, for the very nature of myth in modern as well as ancient culture." - Peter Machinist, Harvard University, USA

"Tugendhaft’s bold interpretation of the Baal Cycle is built on his mutually enlightening reading of poetry and political texts. His work highlights the need for biblical scholars and historians of religion to engage with the texts from Ugarit that document the world out of which the literary texts emerged. Baal and the Politics of Poetry is a model for how this much needed work might be done." - Christine Neal Thomas, Review of Biblical Literature 2019

"Baal and the Politics of Poetry offers a persuasive and nuanced interpretation of the Baal Cycle. Tugendhaft does an excellent job of re-embedding the Baal Cycle in its historical context with his frequent and illuminating references to administrative and diplomatic texts from the Late Bronze Age ... Tugendhaft is to be congratulated for significantly advancing the scholarship on the Baal Cycle." - Aren M. Wilson-Wright, Bryn Mawr Classical Review 2018

"Not only does Aaron Tugendhaft's interpretation shed considerable light on the cycle in its coherence, but the cycle itself, read in this way, makes it possible to grasp how international relations and conceptions of kinship fit together." - Christophe Lemardelé, Semitica et Classica 2019

"[this book] opens new ways in the research on the function of this myth and its relationship to history ... the major strength of the book remains the light that is [shone] on the scribes in Ugarit, their influence but also the practice and practice of their art or their authority." - Stéphanie Anthonioz, Syria journal 2018

"The strengths of the present work are its modeling contextualization of mythological texts by reference to documents illuminating contemporary sociopolitical realia and its productive dismantling of scholars’ sneakiest tendencies when characterizing the political import of ancient Middle Eastern myths. Tugendhaft’s innovative perspective on what one such myth is really doing is a thoughtful and detailed counterbalance to those tendencies, and it is therefore warmly welcomed." - Madadh Richey, The Review of Politics

"Not only learned but incredibly well-written" - Christopher B. Hays, Fuller Theological Seminary, USA

"I [have] described Tugendhaft’s work as based on careful study of the texts and on deep reflection. For this, he is to be congratulated, and his book should be, and certainly will be, widely read." - Dennis Pardee, Journal of Near Eastern Studies 2019

"It engages with the Baal Cycle in an original way, stretches it to make new arguments, and demands that we reconsider how we read it and other ancient Near Eastern texts like it. All of this enriches not only our understanding of the Baal Cycle and ancient Near Eastern literature more broadly, but forces us to think more deeply about how such texts fit into their own contexts and how they can convey all sorts of messages that speak to those contexts. Baal and the Politics of Poetry will serve as a milestone in the discussion of these questions. For this, Aaron Tugendhaft deserves our gratitude." BIBLIOTHECA ORIENTALIS, 2019