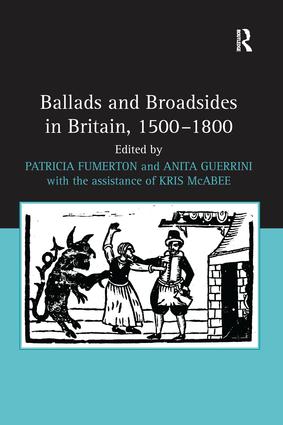 Bringing together diverse scholars to represent the full historical breadth of the early modern period, and a wide range of disciplines (literature, women's studies, folklore, ethnomusicology, art history, media studies, the history of science, and history), Ballads and Broadsides in Britain, 1500-1800 offers an unprecedented perspective on the development and cultural practice of popular print in early modern Britain. Fifteen essays explore major issues raised by the broadside genre in the early modern period: the different methods by which contemporaries of the sixteenth through nineteenth centuries collected and "appreciated" such early modern popular forms; the preoccupation in the early modern period with news and especially monsters; the concomitant fascination with and representation of crime and the criminal subject; the technology and formal features of early modern broadside print together with its bearing on gender, class, and authority/authorship; and, finally, the nationalizing and internationalizing of popular culture through crossings against (and sometimes with) cultural Others in ballads and broadsides of the time.

Prize: Shortlisted for the Katharine Briggs Award, 2011, sponsored by The Folklore Society (UK) 'A hog-faced woman, murderous wives, blackface pirates - this rich collection of essays offers the latest word on British ballads from a wide spectrum of scholars in literature, ethnomusicology, folklore, and history. Required reading for anyone with a sophisticated interest in pre-1800 popular culture in Britain and America.' Leah Marcus, Vanderbilt University, USA 'Ballads and Broadsides makes a significant contribution to extant research on ballad scholarship.' Ethnomusicology 'This handsomely-produced volume brings together fifteen essays and an afterword, derived largely from the papers delivered at the University of California, Santa Barbara, Early Modern Center's Winter Conference of 2006… It will make widely available much material not included in EEBO and ECCO.' Rare Books Newsletter '… the history of collecting and evaluating ballads from Pepys to the digital age, is particularly useful as an introduction to the study of ballads and deserves to be widely read. … In representing the interests of 'literature, women's studies, folklore, ethnomusicology, art history, media studies, the history of science, and history' the editors successfully promote the riches and the potential of EBBA.' The Library 'Overall, this collection offers a fulfilling variety of subjects and approaches, but at the same time there is also a sense of common purpose and a lovely sense of collegial engagement between the different scholars and essays… The book can be very highly recommended both for those with interest in individual topics covered and as a first-rate sample of directions in recent and on-going ballad scholarship.' Lied und PopulÃ¤re Kultur 'It is clear that the contributors to this volume have made an effort to construct the book as a conversation between disciplines and fields, collecting essays much like the ballad collectors they examine. The result is a

Patricia Fumerton is Professor of English at the University of California, Santa Barbara, and Director of the online English Broadside Ballad Archive. Her many recent publications focus on the early modern "low." Anita Guerrini is Horning Professor in the Humanities and Professor of History at Oregon State University. She has published widely in the history of early modern science. Kris McAbee is Assistant Professor of English at the University of Arkansas, Little Rock and formerly Director of the English Broadside Ballad Archive. Her work explores Renaissance sonnet and ballad culture.