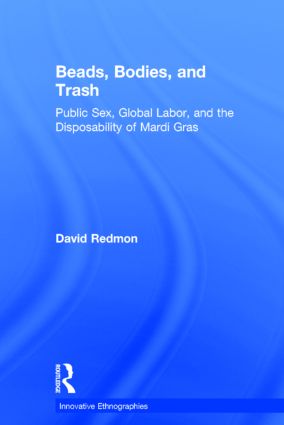 Beads, Bodies, and Trash merges cultural sociology with a commodity chain analysis by following Mardi Gras beads to their origins. Beginning with Bourbon Street of New Orleans, this book moves to the grim factories in the tax-free economic zone of rural Fuzhou, China. Beads, Bodies, and Trash will increase students’ capacity to think critically about and question everyday objects that circulate around the globe: where do objects come from, how do they emerge, where do they end up, what are their properties, what assemblages do they form, and what are the consequences (both beneficial and harmful) of those properties on the environment and human bodies? This book also asks students to confront how the beads can contradictorily be implicated in fun, sexist, unequal, and toxic relationships of production, consumption, and disposal. With a companion documentary, Mardi Gras Made in China, this book introduces students to recording technologies as possible research tools.

"David Redmon takes us, with equal aplomb, to the Chinese factories where party beads are made and the tawdry public where Mardi Gras revelers exchange them for public sex. Of the studies of global commodity networks his is among the most vivid, compelling and theoretically informed. A superb case study, it is also a useful introduction to video ethnography and a mini study of his film on the same topic. Redmon’s ability to fuse the insights of the great thinkers of sociology with the intimate experiences of Chinese factory workers and Mardi Gras partiers makes the case that ethnography is alive and well. Redmon’s ride is full of irony, surprises, and the cruel contradictions of global capitalism; it is a must read."

"Redmon deftly takes what appear to be simple party favors--Mardi Gras beads--and traces their international production and circulation, the meanings they carry, and the "social relations of sensuality" they animate. Ethnographically rich, complex, and theoretically innovative, Beads, Bodies, and Trash is an extraordinary work of sociological storytelling."

"Redmon expertly explores the vast and growing inequities of global capitalism while also investigating the lived experiences of men and women linked together through the production and consumption of these festive plastic beads. Redmon’s nuanced discussion of ethnographic filmmaking also provides an essential methodological grounding for aspiring visual anthropologists and sociologists."

"David Redmon’s Beads, Bodies, and Trash is a kaleidoscope of theoretical and methodological innovation. Turned one way, Redmon’s kaleidoscope locates the political economy of global capitalism in the sensuality of everyday life. Turned another, it reveals Redmon’s elegant construction of sociological narrative within emerging media. At every turn, it situates Beads, Bodies, and Trash amidst the very best of contemporary global scholarship."

"Tracking a bead from the factories of China to the New Orleans Mardi Gras opens up a world that goes well beyond work and play. We see, we smell, we hear exploitation and celebration, anguish and hope, and the work of making and unmaking. This is an extraordinary account. "

"Beads, Bodies and Trash is something quite new. A gripping memoir of intellectual inquiry, it tells the story of the making of Mardi Gras: Made in China, the very best filmic treatment of globalization that follows the travels of inexpensive plastic beads from the Chinese factory where they are produced to Bourbon Street in New Orleans where they are transmogrified into tokens for purchasing attention and sexual favors from strangers in that city's extraordinary annual bacchanal. What makes this book remarkable is how it brings us along on the physical and intellectual journey embarked on by the author. We glide from engaging ethnographic description to methodological discovery and advice, to theoretically illuminating meditations on our relations to our bodies, the things we prize, and the global circulation of commodities that so animates our lives. Beads, Bodies and Trash adds a new dimension to the film by exploring what happens to the environment when the beads die and go to their final resting place in landfills; and how a new generation of activists is seeking for cultural preservation (the mayhem of Mardi Gras) and ecological sustainability. Both book and film are alluring. They draw the reader into a personal encounter with the experiences, the processes and quandaries of globalization, and has much to say about the kinds of people we are becoming. As if that isn't enough, Redmon concludes with a detailed and very useful guide to ethnographic filmmaking that should open the door for a new generation of sociological moviemakers. Quite simply, Beads, Bodies and Trash is the best single introduction to building a more visual (and sensually attuned) social science that has been written in decades."

David Redmon, Ph.D. is a Lecturer in the School of Social Policy, Sociology and Social Research, University of Kent at Canterbury. He has produced, directed, edited and photographed Mardi Gras: Made in China (2005), Kamp Katrina (2007), Intimidad (2008), Invisible Girlfriend (2009), Girl Model (2011), Downeast (2012), Kingdom of Animal (2012), Night Labor (2013), and Choreography (2014). Redmon’s intimate and intricately crafted documentaries have premiered at Sundance, Toronto, and Viennale Film Festivals and have won a variety of awards. Redmon’s work has aired on PBS, POV, BBC, CBC, DR, ARTE, NHK, and other television stations throughout the world. Redmon received his Ph.D. in sociology from the University at Albany, State University of New York and is an alumni of the Radcliffe Institute for Advanced Studies at Harvard University and Harvard University’s Film Studies Center.

The purpose of this series is to use the new digital technology to capture a richer, more multidimensional view of social life than was otherwise done in the classic, print tradition of ethnography, while maintaining the traditional strengths of classic, ethnographic analysis.