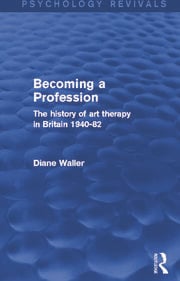 Becoming a Profession: The History of Art Therapy in Britain 1940-82

Britain was the first country to recognise art therapy as a profession in the state health service. How did this come about? Can the British experience serve as a model for other countries?

Originally published in 1991 Becoming a Profession is the first comprehensive history of art therapists in Britain and of their struggle for professional recognition. Diane Waller discusses the work of the founding art therapists of the 1940s and 1950s and assesses their contribution in detail. She also puts art therapy in a political context, showing how the British Association for Art Therapists worked closely with the trade union movement in its campaigns to get professional recognition.

Fascinating reading for all practising art therapists, art therapy teachers and students, Becoming a Profession will also be relevant to anyone interested in the formation and development of professions.

Roland Littlewood Foreword  Acknowledgements  Introduction  Part I Background to Art Therapy  1 Some views of art therapy  2 Art therapy’s roots in art education  3 Psychiatry and art  Part II The Role of Individual Artists and Psychotherapists in the Development of Art Therapy from the 1940s to the Formation of BAAT  Introduction  4 The context of the visual arts and health care provision in the 1940s  5 Adrian Hill  6 Edward Adamson and Rita Simon: moving from commercial art to art therapy  7 The Withymead Centre: the role of Gilbert and Irene Champernowne in promoting the theory and practice of art therapy  8 The influence of psychoanalysts on the intellectual development of art therapy  9 Reflections on being a pioneer art therapist  Part III Beginning of Organised Activity: the First Working Parties in Art Therapy  Introduction  10 Art therapy in the witness box  11 A struggle for ownership  12 Moves towards organised activity: the idea of forming a professional association  13 The inaugural meeting of BAAT: aims and objects established  14 Some of the main issues influencing BAAT’s decision to become a Central Association of the NUT  15 The campaign organised by BAAT and the NUT to gain comparable status with adult education lecturers  16 Some problems and contradictions within the campaign for employment under the LEAs  17 First moves towards the Health Service  18 Struggles for control of art therapy in the context of a Whitley Council initiative  Part IV The Campaign to Establish Art Therapy in the NHS  Introduction  19 BAAT and ASTMS: joint negotiations for a place on the Whitley Council for art therapists  20 The DHSS Consultative Document on art, music, drama, etc., therapy and the subsequent campaign by BAAT and ASTMS to change its recommendations  21 The Clegg Commission  Part V Training in Art Therapy  Introduction  22 Some contextual background and early views on training  23 Art therapy training within an educational framework  24 The BAAT Registration and Training Sub-Committee and its contribution to the debate on art therapy training during the 1970s  25 Attempts at training which failed to materialise  Part VI Concluding Thoughts  26 After 1982: fresh challenges for art therapists  Appendix: BAAT Registration Advisory Committee: report and recommendations  References  Name index  Subject index