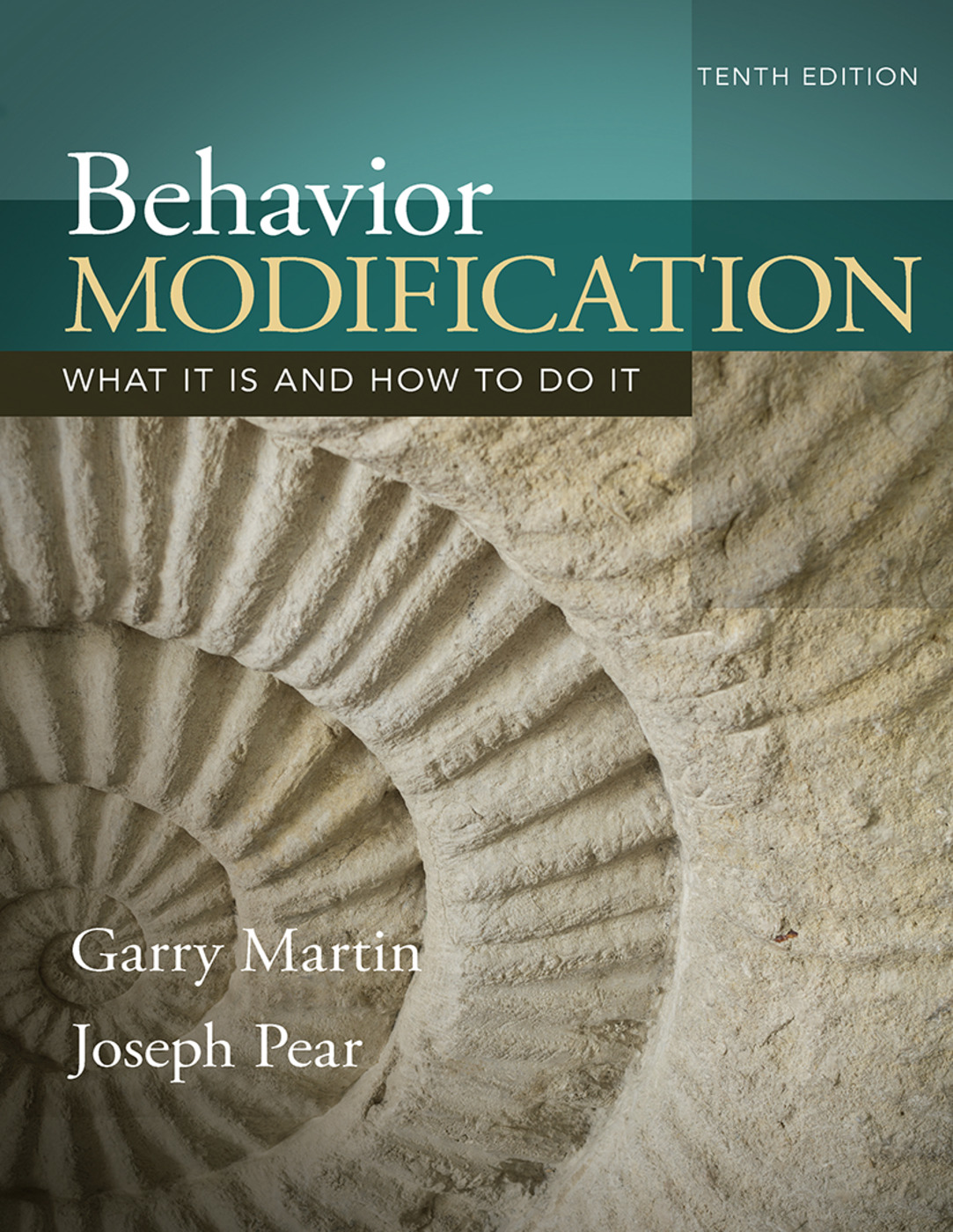 What It Is and How To Do It, 10th Edition

Part I : The Behavior Modification Approach

Chapter 2: Areas of Application: An Overview

Chapter 6: Decreasing a Behavior with Extinction

Chapter 7: Getting a New Behavior to Occur with Shaping

Chapter 9: Responding at the Right Time and Place: Stimulus Discrimination and Stimulus Generalization

Chapter 10: Changing the Control of a Behavior with Fading

Chapter 11: Getting a New Sequence of Behaviors to Occur with Behavior Chaining

Chapter 15: Respondent and Operant Conditioning Together

Chapter 21: Direct Behavioral Assessment: What to Record and How

Part V: Putting It All Together to Develop Effective Behavioral Programs

Chapter 29: Giving It All Some Perspective: A Brief History

Garry Martin, a native Manitoban, attended Colorado College on a hockey scholarship, where he received the BA degree. He then attended Arizona State University for the MA and PhD degrees. Garry returned to Manitoba in 1966 and taught in the Department of Psychology at the University of Manitoba until his retirement at the end of 2008. He is currently a Distinguished Professor Emeritus at the U of M, and he continues to supervise graduate students, teach part-time, and write and publish. He has co-authored or co-edited 8 books and over 150 journal articles on various areas in behavioral psychology. His book, Behavior Modification: What It Is and How to Do It, with Dr. Joseph Pear, first published in 1978, is used as a primary text at many universities in 14 countries and various editions have been translated into Spanish, Italian, Portuguese, Chinese, and Korean. His research on behavioral training technologies for improving the quality of life of people with developmental disabilities and children with autism has been supported continuously by the Medical Research Council of Canada, and now the Canadian Institutes of Health Research for the past 32 years. He has been an invited speaker at numerous national and international conferences around the world. He has supervised 38 Masters theses, and 32 PhD theses at the University of Manitoba, and has received numerous honors and awards, including induction into the Royal Society of Canada. At the 2010 Annual Convention of the Canadian Psychological Association, Garry received the CPA Education and Training Award, the most prestigious education and training award the discipline confers in Canada.

Dr. Joseph J. Pear, Professor of Psychology at the University of Manitoba, received the B.S. degree from the University of Maryland and the M.A. and Ph.D. degrees from The Ohio State University. A fellow of Division 6 (Behavioral Neuroscience and Comparative Psychology) and Division 25 (Behavior Analysis) of the American Psychological Association, Dr. Pear has done both basic and applied research. His early applied work was with children with developmental disabilities at the St. Amant Centre, where he founded the Behaviour Modification Unit (now the Psychology Department) in the early 1970s. More recently, he developed Computer-Aided Personal System of Instruction (CAPSI), an instructional program based on the Keller Plan. CAPSI is an award winning program that is being used to teach a number of courses at University of Manitoba and at several other universities in Canada and the United States. It is also a research tool that Dr. Pear and his graduate students use to research the teaching and learning dimensions of university education. Dr. Pear has also done basic research with pigeons and fish using a tracking system that he developed. In addition to Behavior Modification: What It Is and How to Do It with Dr. Garry Martin, Dr. Pear has written two other books: The Science of Learning and A Historical and Contemporary Look at Psychological Systems. He has also written numerous research articles and two encyclopedia articles: “Psychological Systems” in The Corsini Encyclopedia of Psychology (Fourth Edition) and “Physiological Homeostasis and Learning” in Encyclopedia of the Sciences of Learning. He has received awards for Outstanding Contribution to Behaviour Analysis in Manitoba and for Innovative Excellence in Teaching, Learning, and Technology. He also received the Fred S. Keller Behavioral Education Award for Distinguished Contributions to Education.