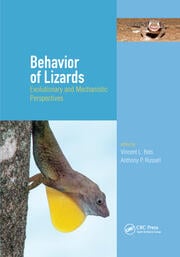 Lizards serve as focal organisms for many of biological questions related to evolution, ecology, physiology, and morphology. They are studied at multiple spatial and temporal scales, from the individual to the community level. This book, authored by expert contributors from around the world, explores behaviors underlying the evolution and adaptation of these organisms. It covers conceptual, empirical, and methodological approaches to the understanding of the role that natural and sexual selection play in molding the behavioral traits of lizards.
This thorough, illustrated reference should stimulate discussion of the conceptual and methodological approaches for studying the behavioral traits of these fascinating and highly diverse vertebrates.

Vincent Bels was born in Verviers, Belgium. He completed his PhD on the association between ethology and functional morphology at the University of Liège (Liège, Belgium). He used lizards as a key model to investigate the process of behavioral ritualization. He was Research Fellow and then Assistant Professor at the University of Liège (Belgium) for more than 10 years. Then he taught Biology, Zoology and Ecology, and developed an applied research program on feeding behavior in domestic animals at the Haute Ecole Condorcet and its associated Agronomic Centre (Belgium) for 10 years. He became Professor at the Muséum national d’Histoire naturelle (Paris, France) in 2005, and in this capacity served as joint director of a Mixed Research Unit (CNRS/MNHN, France) for over 7 years, as a member of the Scientific Committee of the Muséum national d’Histoire naturelle (Paris, France) for 8 years, and as a member of the Scientific Sections of the Centre National de Recherche Scientifique (CNRS, France) for a similar period. He has authored over 100 peer-reviewed articles, 10 chapters, and 6 books. The major theme of his research publications is the study of feeding, drinking and displaying in lizards, although he also published some papers on feeding and locomotion in fishes and birds. His main objective is the integration of behavioral and morphological studies into a comprehensive understanding of the "Form-Function" complex as it relates to the evolution of the trophic system of Vertebrates.

Tony Russell was born in London, UK. He completed his BSc at the University of Exeter and his PhD at the University of London. Upon completion of his PhD he took up a short teaching appointment at the University of Botswana, Lesotho and Swaziland before beginning his work at the University of Calgary, during which time he served for six years as head of the Department of Biological Sciences. After 40 years of teaching various aspects of vertebrate biology and evolutionary biology he retired from his faculty position in 2013, but continues with his research. He has authored over 300 peer-reviewed scientific articles, 19 chapters, and three books. Although he has published on many groups of vertebrates, the continuing focus of his research has been the structure, function and evolution of geckos. His field work has taken him to Australia, New Zealand, many islands in the Eastern Caribbean, Namibia, and, most recently, Trinidad and Tobago. He has received recognition for his contributions including the NSERC 25 Years of Excellence Award, the Alberta Foundation for Environmental Excellence Award, and the University of Calgary Distinguished Faculty Award. Outside the University he has served as President of the Canadian Society of Zoologists, and President of the International Society of Vertebrate Morphologists.