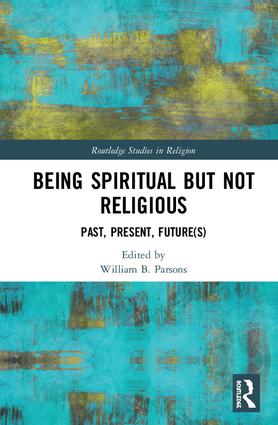 Being Spiritual but Not Religious

Edited by William B. Parsons

In its most general sense, the term "Spiritual but Not Religious" denotes those who, on the one hand, are disillusioned with traditional institutional religion and, on the other hand, feel that those same traditions contain deep wisdom about the human condition. This edited collection speaks to what national surveys agree is a growing social phenomenon referred to as the "Spiritual but Not Religious Movement" (SBNRM).

Each essay of the volume engages the past, present and future(s) of the SBNRM. Their collective contribution is analytic, descriptive, and prescriptive, taking stock of not only the various analyses of the SBNRM to date but also the establishment of a new ground upon which the continued academic discussion can take place.

This volume is a watershed in the growing academic and public interest in the SBNRM. As such, it will vital reading for any academic involved in Religious Studies, Spirituality and Sociology.

"This book makes a substantial contribution to the complexities and particularities of the penumbras of religion that are only apparently new. SBNR is here to stay as long as some define themselves or others in opposition to “religion.” That this is a major phenomenon of western culture does not mean that it is universal nor that its significance is thereby diminished. We definitely need more nuanced studies of SBNR, for which this collection of essays is a provocative prolegomenon."

1 Spiritual but Not Religious: A Brief Introduction

2 The Triumph of the Therapeutic and Being SBNR

Sean Fitzpatrick and William B. Parsons

3 "Is God Dead?" Christian Atheism and the Rise of the SBNR Sensibility

4 Buddhist Fulfillment of a Protestant Dream: Mindfulness as Scientific Spirituality

5 Plurals, Hybrids and Nomads: Spirituality and Religious Practice at the Intersections

6 Minds of Their Own: Psychological Substrates of the SBNR Sensibility

7 Belief without Borders: Examining Anew the Minds of the Spiritual but Not Religious

12 Toward a Metamodern Reading of Spiritual but Not Religious Mysticisms

13 Transpersonal Psychology and the Spiritual but Not Religious Movement: Beyond Spiritual Narcissism in a Postsecular Age

14 Being Spiritual but Not Hierarchical

15 "Comparison Gets You Nowhere!" The Comparative Study of Religion and the Spiritual but Not Religious

William B. Parsons is Professor of Religion at Rice University. His publications include The Enigma of the Oceanic Feeling (1999), Religion and Psychology: Mapping the Terrain (2001), Teaching Mysticism (2010), Mourning Religion (2008), Freud and Augustine in Dialogue: Psychoanalysis, Mysticism, and the Culture of Modern Spirituality (2013), and dozens of articles in multiple journals and edited books. He has served as Chair of the Department of Religion and Director of the Humanities Research Center at Rice University, Editor (the psychology of religion section) with Religious Studies Review, and has been a Fellow at the Martin Marty Center of the University of Chicago and at the Institute for Advanced Studies (IAS) at Hebrew University.