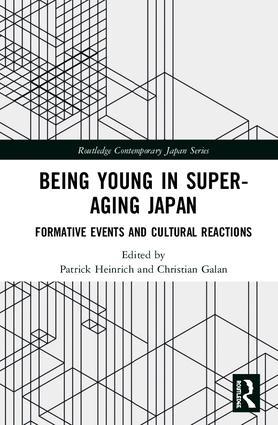 Being Young in Super-Aging Japan

Japan is not only the oldest society in the world today, but also the oldest society to have ever existed. This aging trend, however, presents many challenges to contemporary Japan, as it permeates all areas of life, from the economy and welfare to social cohesion and population decline. Nobody is more affected by these changes than the young generation.

This book studies Japanese youth in the aging society in detail. It analyses formative events and cultural reactions. Themes include employment, parenthood, sexuality, but also art, literature and language, thus demonstrating how the younger generation can provide insights into the future of Japanese society more generally. This book argues that the prolonged crisis resulted in a commonly shared destabilization of thoughts and attitudes and that this has shaped a new generation that is unlike any other in post-war Japan.

Presenting an inter-disciplinary approach to the study of the aging trend and what it implies for young Japanese, this book will be useful to students and scholars of Japanese culture and society, as well cultural anthropology and demography.

2.The political economy of the declining birthrate, Yuiko Imamura

3. From youth to non-adulthood in Japan: The role of education, Christian Galan

4. Youth sexuality under the spotlight in a super-aging society with too few children, Beverley Anne Yamamoto

5. Raising children and emergence of new fatherhood in a super-ageing society, Masako Ishii-Kuntz

7. The Fukushima event, or the birth of a politicized generation, Anne Gonon

8."How Average am I?" Youths in a super-aged society, Florian Coulmas

9. The structure of happiness: Why young Japanese might be happy after all, Carola Hommerich and Tim Tiefenbach

11. Dialect cosplay: Language use by the young generation, Patrick Heinrich

14. The resilient generation of the Heisei period, Christian Galan and Patrick Heinrich

Patrick Heinrich is Associate Professor at Ca’ Foscari University in Venice, Italy. His recent publications include (with Dick Smakman) Urban Sociolinguistics (Routledge 2017) and The Making of Monolingual Japan (2012).

is Professor at Toulouse-Jean Jaurès University, France and researcher at the CEJ-Inalco in Paris. His recent publications include (with E. Lozerand) La Famille japonaise moderne (1868-1926) (2011) and (with J.-M. Olivier) Histoire du & au Japon (2016).