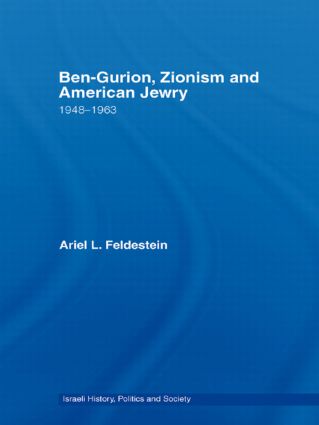 Based on archival material, this intriguing book examines David Ben-Gurion’s influence on the relationship between the state of Israel, the Zionist Organization and American Jewry between 1948 and 1963 when he served as Prime Minister and Minister of Defence. The author discusses how Ben-Gurion was largely instrumental in forming Israel’s policies throughout the first two decades of the country’s existence and, due to his position, personality and prestige, he was able to influence the fashioning of political structures as well as their content.

The book discusses both the political motives of the leaders and the ideological discourse, in order to understand their dependency and to highlight their significance in the terms Diaspora and exile, the centrality of the State of Israel, and the role played by the Jews of America. As such this will be of great interest to scholars of Middle East Studies, Jewish Studies, and ethnicity and nationalism.

This series provides a multidisciplinary examination of all aspects of Israeli history, politics and society and serves as a means of communication between the various communities interested in Israel: academics, policy-makers, practitioners, journalists and the informed public.