Between Indigenous and Settler Governance 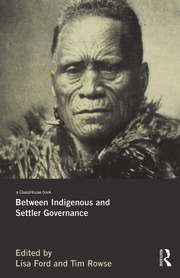 Between Indigenous and Settler Governance

Between Indigenous and Settler Governance addresses the history, current development and future of Indigenous self-governance in four settler-colonial nations: Australia, Canada, New Zealand and the United States. Bringing together emerging scholars and leaders in the field of indigenous law and legal history, this collection offers a long-term view of the legal, political and administrative relationships between Indigenous collectivities and nation-states. Placing historical contingency and complexity at the center of analysis, the papers collected here examine in detail the process by which settler states both dissolved indigenous jurisdictions and left spaces – often unwittingly – for indigenous survival and corporate recovery. They emphasise the promise and the limits of modern opportunities for indigenous self-governance; whilst showing how all the players in modern settler colonialism build on a shared and multifaceted past. Indigenous tradition is not the only source of the principles and practices of indigenous self-determination; the essays in this book explore some ways that the legal, philosophical and economic structures of settler colonial liberalism have shaped opportunities for indigenous autonomy. Between Indigenous and Settler Governance will interest all those concerned with Indigenous peoples in settler-colonial nations.

1. Locating Indigenous self-determination in the margins of settler sovereignty: an introduction, Lisa Ford 2. Vattel in revolutionary America: from the rules of war to the rule of law, Ian Hunter; 3. Settler sovereignty and the shapeshifting Crown, Paul McHugh and Lisa Ford; 4. ‘It would only be just’: a study of territoriality and trading posts along the Mackenzie River, 1800–1827, Janna Promislow; 5. Pan-nationalism as a crisis management strategy: John Ross and the Tahlequah conference of 1843, Tim Garrison; 6. Obstacles to ‘a proper exercise of jurisdiction’ – sorcery and criminal justice in the settler–Indigenous encounter in Australia, Heather Douglas and Mark Finnane; 7. Vanished theocracies: Christianity, war and politics in colonial New Zealand 1830–1880, Richard Boast; 8. When settlers went to war against Christianity, Norman Etherington 9. The identity of indigenous political thought, Tim Rowse; 10. Economy, change and self-determination: a Central Australian case, Diane Austin-Broos; 11. Land rights and development in Australia: caring for, benefiting from, governing the Indigenous estate, Jon Altman; 12. Indigenous land rights and self-government: inseparable entitlements, Kent McNeil; 13. Three Peversities in Indian Law, Jacob T. Levy; 14. Section 223 and the shape of Native Title: The limits of jurisdictional thinking, Shaunnagh Dorsett and Shaun McVeigh; 15. Whakaeke i ngā ngaru – riding the waves: Māori legal traditions in New Zealand public life, Carwyn Jones; 16. Indigenous jurisdiction as a provocation of settler state political theory: the significance of human boundaries, Kirsty Gover; 17. Bibliography

'The most significant contribution of this welcome volume is that it addresses the question of how to study indigenous peoples within the framework of the global phenomenon of settler colonialism. Moreover, the book does not stop at raising the question, in the manner of Gayatri Spivak’s ‘Can the subaltern speak?’. Rather it goes on to investigate the colonized indigenous communities’ interaction with the invading colonizers. Some of the contributions offer structural analyses of this interaction, while others bring to the fore indigenous subjectivity; not a few of them do both. Crucially, the volume as a whole is a healthy combination of epistemological and ontological contemplation of the colonized on the one hand and documented empirical study of their actual history, economy, and anthropology on the other.' - Gabriel Piterberg, UCLA, USA, for Journal of Global History