Between Love and Freedom
The Revolutionary in the Hindi Novel 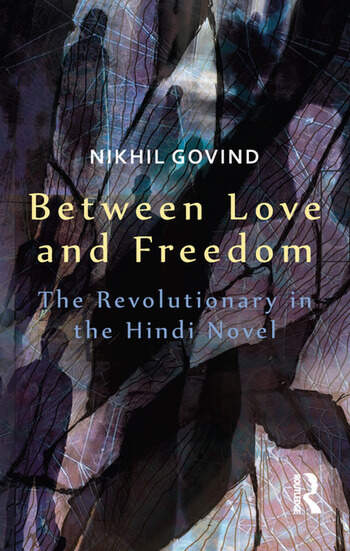 Between Love and Freedom: The Revolutionary in the Hindi Novel

Between Love and Freedom interprets the figure of the revolutionary in the Hindi novel by establishing its lineage in representative Bengali novels, as well as in the contending moralities of Mahatma Gandhi and Bhagat Singh on the idea of violence. It reveals how conventional social realism and emergent modernist modes were brought together in the novelistic tradition by extending the political ideal of anti-colonial revolution into domains of sexual desire and subjective expression, especially in the works of Agyeya, Jainendra, and Yashpal. This work will deeply interest scholars and students of literature, modern Indian history, Hindi, and political science.

Nikhil Govind is Assistant Professor at the Manipal Centre for Philosophy and Humanities, Manipal University.

‘This book takes a sensitive, sophisticated, and occasionally startling look at select literary representations of the figure of the armed fighter for Indian freedom — a "revolutionary" for us and a "terrorist" for the British. It demonstrates how nationalist political freedom was often seen by Hindi and Bengali novelists as a corollary of private sexual freedom, and deploys the resolutely non-violent and abstinent Gandhi as an admonitory measuring-rod. The book may not always persuade but is no less stimulating for that reason.’ — Harish Trivedi, Department of English, University of Delhi

— A. Raghuramaraju, Department of Philosophy, University of Hyderabad

‘[A] brilliant and sympathetic study . . . Govind probes the complex inter-relationship of the social, political and the individual in his masterly reading.’

'The author emphasizes the importance of Hindi literature as an intellectual medium in which philosophical, political and subjective considerations flow smoothly into one another.' — Johanna Hahn, ASIEN, The German Journal on Contemporary Asia, No. 144, July 2017