Between Morality and the Law
Corruption, Anthropology and Comparative Society 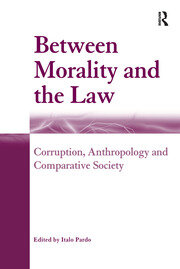 Between Morality and the Law: Corruption, Anthropology and Comparative Society

This book explores illegal forms of corruption and, more widely, moral and legal forms of corruption. The authors draw on detailed ethnographic accounts of corrupt practice at local, national and international levels. Coverage includes both Western and non-Western societies, from Italy to Latin America, to Albania, Africa and post-Soviet bureaucracy in Russia, Mongolia and Kazakhstan. There is also a chapter on corruption in the context of globalization. Key issues discussed include the problems caused by the inflated rhetoric of corruption and by the inadequacy of official definitions. The authors look at measures designed to bring corruption under some degree of control, discussing the level of legal intervention compatible with public expectations and with the dynamics of trust and responsibility. This fascinating book makes a significant contribution to our understanding of conflicting public and private moralities.

Contents: Introduction: corruption, morality and the law, Italo Pardo; Interés, morality and legality in Southern Spain, John Corbin; Where it hurts: an Italian case of graded and stratified corruption, Italo Pardo; Corruption between morality and legitimacy in the context of globalization, Arcibaldo Miller; 'The devil is not as wicked as people believe, neither is the Albanian': corruption between moral discourses and national identity, Giuliana B. Prato; Shanghaied by the bureaucracy: bribery and post-Soviet officialdom in Russia and Mongolia, Caroline Humphrey and David Sneath; Corruption in post-Soviet Kazakhstan, Jakob Rigi; Rotten talk: corruption as a part of discourse in contemporary Latvia, Klavs Sedlenieks; The 'Cancer of Corruption', Elizabeth Harrison; Corruption as the mirror of the State in Latin America, John Gledhill; Index.

Italo Pardo is an Honorary Reader in Social Anthropology in the Department of Anthropology at the University of Kent and a Member of Eliot College, University of Kent. He has published many books (two sole-authored volumes and several edited volumes) including the 'Morals of Legitimacy' (2001), over 25 articles and essays in outstanding peer-reviewed British and international journals, comments in quality papers, and several contributions to edited volumes.

’The case studies included would prove useful to anthropologists, ethnographers, sociologists and other social scientists who in the future would be interested in approaching the ubiquity of corruption on a global scale.’ Journal of the Royal Anthropological Institute