Beyond Gender Differences
Adaptation to Aging in Life Course Perspective 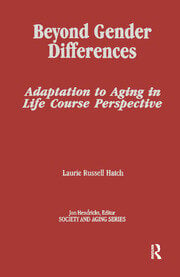 Beyond Gender Differences: Adaptation to Aging in Life Course Perspective

Putting gender in a lifespan context, Hatch (sociology, U. of Kentucky) atypically accents the gains as well as losses of aging and sex differences in adaptation overall, to the death of a spouse, and to retirement. From the multifactored theoretical perspectives of symbolic interactionism and polit

CHAPTER 1—Introduction
The rationale for the book is presented. The aging experience often has been framed by scholars as well as the general public in terms of gender differences, but the nature and direction of such differences are controversial.

CHAPTER 2—Putting Gender in Life Course Context
The two theoretical approaches to gender differences that have been used most widely in social gerontology are reviewed and a life-course perspective is advanced as an alternative framework.

CHAPTER 4—Adaptation to the Death of a Spouse

CHAPTER 5—Adaptation to Retirement
The substantive chapters of the book examine adaptation to aging as a broad and cumulative process (Chapter 3) and two life events that have been thought to pose the greatest challenges to adaptation in older age: the death of a spouse (Chapter 4) and retirement (Chapter 5). Each of these three chapters is designed to address these questions: How have theories of gender difference been used to explain adaptation in this realm of experience? To what degree have gender differences been documented in the relevant empirical literature, and are the reported findings supportive of gender difference theories? How and why does a life course perspective provide a more satisfactory framework for understanding women's and men's adaptation to aging, and their adaptation to later-life events in particular?

CHAPTER 6—Conclusion
The theoretical underpinnings for the life course approach utilized in the book are examined. Theoretical linkages that can be made with this approach are suggested. The book concludes by considering how adaptation to aging can be framed to focus more fully on life-long processes and challenges rather than on particular life events which are assumed to be stressful.

Dr. Laurie Russell Hatch engages in the scholarship of teaching and learning and is a Professor of Sociology at the College of Arts and Sciences, University of Ohio.