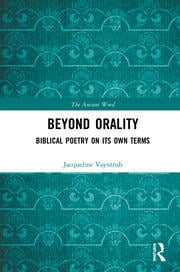 Central to understanding the prophecy and prayer of the Hebrew Bible are the unspoken assumptions that shaped them—their genres. Modern scholars describe these works as “poetry,” but there was no corresponding ancient Hebrew term or concept. Scholars also typically assume it began as “oral literature,” a concept based more in evolutionist assumptions than evidence. Is biblical poetry a purely modern fiction, or is there a more fundamental reason why its definition escapes us?

Beyond Orality: Biblical Poetry on its Own Terms changes the debate by showing how biblical poetry has worked as a mirror, reflecting each era’s own self-image of verbal art. Yet Vayntrub also shows that this problem is rooted in a crucial pattern within the Bible itself: the texts we recognize as “poetry” are framed as powerful and ancient verbal performances, dramatic speeches from the past. The Bible’s creators presented what we call poetry in terms of their own image of the ancient and the oral, and understanding their native theories of Hebrew verbal art gives us a new basis to rethink our own.

From Proverbs and Poetry to Prose: The Bible’s Own "Great Divide"

Modernity and the Paradox of "Ancient Wisdom"

The Idea of Mashal: Scholarship’s Quest for the Essence of Poetry

The Problem of Locating Poetry’s Essence

Mashal and Mimesis: the Biblical Poetics of Medieval Jewish Spain

mashal as mimesis Locating the Sublime: Biblical Literature and the Rise of Romanticism

mashal as the building block of Hebrew poetry

Why are Psalms more Poetic than Proverbs?

Herder and the term

mashal as a native description of biblical poetry

The legacy of Michaelis: conventional ideas in the study of biblical poetry

Biblical Poetry in a Structuralist Framework

The Idea of Biblical Mashal

The Problem of Mashal as a Form in Wisdom Literature

What is “wisdom literature,” and does mashal belong to this category?

Assumptions Made in the Study of Wisdom Literature

Mashal as an Orally Performed Composition

Searching for the "Oral" in the Written Text

The Bible as Oral Literature

The Speech Performance Frame: The Case of Balaam’s Speeches

The Concluding Mashal Speeches in Num 24

Points of Intersection between the Mashal and the Qinah

Performance and its Reception: To "Become" a Mashal

Between Titles and Tales: Solomon in Prov 1:1

Speech Performance Frames: Towards a Categorization

Framing and speech performance in the book of Proverbs

"Vayntrub expertly navigates her way through the genres of biblical poetry and the history of scholarship, providing a lucid explication of the Bible’s representation of poetry as oral performance and instruction. An elegant and erudite contribution to a new wave of studies of biblical poetry." - Ronald Hendel, University of California Berkeley, USA

"Beyond Orality: Biblical Poetry on its Own Terms is necessary for any biblical scholars interested in poetry, literary cultures, or orality. Moreover, even folks outside of biblical studies will find Beyond Orality to be of interest on account of Vayntrub’s discussion of how the Great Divide has played out in biblical scholarship for the last 400 years [...] it is, undoubtedly, necessary in the Religious Studies section at any serious university." - The Biblical Review

"Beyond Orality is an indispensable work on aesthetics, hermeneutics, and book history for the biblical philologist. As a work of methodology, however, it is even more important given the idea it represents. Vayntrub demonstrates that even our most basic modern literary categories, such as “prose” and “poetry”, are not probative universals but the accidents of history. In a sense, Vayntrub has found a way to make her sources do criticism, a development that philology has awaited since the colonial critique. Beyond Orality reintegrates theory and philology in an enviable but imitable way, giving scholars of ancient literary traditions - be it Akkadian, Sanskrit, Chinese or Kʼicheʼ - all the tools they need to adapt her approach to other ancient textualities." - Reading Religion