Biomass and Biofuels
Advanced Biorefineries for Sustainable Production and Distribution 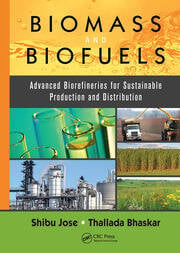 Biomass and Biofuels: Advanced Biorefineries for Sustainable Production and Distribution

The long-held tenets of the energy sector are being rewritten in the twenty-first century. The rise of unconventional oil and gas and of renewables is transforming our economies and improving our understanding of the distribution of the world’s energy resources and their impacts. A complete knowledge of the dynamics underpinning energy markets is necessary for decision-makers reconciling economic, energy, and environmental objectives.

Those that anticipate global energy developments successfully can derive an advantage, while those that fail to do so risk making poor policy and investment decisions. Focused on solving the key challenges impeding the realization of advanced cellulosic biofuels and bioproducts in rural areas, Biomass and Biofuels: Advanced Biorefineries for Sustainable Production and Distribution provides comprehensive information on sustainable production of biomass feedstock, supply chain management of feedstocks to the biorefinery site, advanced conversion processes, and catalysts/biocatalysts for production of fuels and chemicals using conventional and integrated technologies.

The book also presents detailed coverage of downstream processing, and ecological considerations for refineries processing lignocellulosic and algal biomass resources. Discussions of feedstock raw materials, methods for biomass conversion, and its effective integration to make biorefinery more sustainable – economically, environmentally, and socially – give you the tools to make informed decisions.

Cellulosic Biofuel in the United States: Targets, Achievements, Bottlenecks, and a Case Study of Three Advanced Biofuel Facilities
Biorefineries for Sustainable Production and Distribution: A Case Study from India
Techno-Economic and Environmental Impacts of Biofuel Options in Brazil
Biomass and Biofuels: A Case Study from Nigeria
...
View More
View Less

Dr. Shibu Jose is the Harold E. Garrett Endowed Chair Professor and director of the Center for Agroforestry at the University of Missouri, Columbia, Missouri. Prior to his current appointment, he was professor of forest ecology at the School of Forest Resources and Conservation at the University of Florida, Gainesville, Florida. He earned his BS from Kerala Agricultural University, India, and MS and PhD from Purdue University, West Lafayette, Indiana. His current research efforts focus on ecosystem services of agroforestry systems and ecological sustainability of biomass and biofuel production systems. Dr. Jose leads a regional consortium focused on commercializing integrated bio- mass and biofuels production systems, the Mississippi/Missouri River Advanced Biomass/Biofuel Consortium (MRABC). Dr. Jose has authored over 150 refereed publications, edited eight books, and secured nearly $39 million in funding ($10 million as PI). He has also served as major professor for 14 PhD students and 24 MS students during the past 17 years. He serves as editor-in-chief of Agroforestry Systems, academic editor of PLOS ONE, and editorial board member of International Journal of Ecology. His awards and honors include Fulbright Fellowship (U.S. Department of State), Aga Khan International Fellowship (Switzerland), Nehru Memorial Award for Scholastic Excellence (India), Award of Excellence in Research by the Southeastern Society of American Foresters (SAF), Stephen Spurr Award by the Florida Division SAF, the Young Forester Leadership Award by the National SAF, Barrington Moore Award by SAF, and the Scientific Achievement Award by the International Union of Forest Research Organizations (IUFRO).

, a senior scientist, is currently heading the Thermo-Catalytic Processes Area, Bio-Fuels Division (BFD), at CSIR–Indian Institute of Petroleum, Dehradun, India. He earned a PhD for his work at CSIR–Indian Institute of Chemical Technology (IICT), Hyderabad, India. He carried out postdoctoral research at Okayama University, Okayama, Japan, after which he joined as faculty and has worked at the level of research assistant professor for 7 years. Dr. Bhaskar has over 100 publications in journals of international repute with an h-index of 27 and around 2000 citations, contributed 16 book chapters to renowned publishers (Elsevier, ACS, John Wiley, Woodhead Publishing, CRC Press, Asiatech, etc.), and 13 patents to his name in his field of expertise, in addition to 250 national and international symposia presentations. His 20 years of research experience cover various fields of science revolving around his expertise in heterogeneous catalysis and thermochemical conversion of biomass, waste plastics, and e-waste (WEEE) plastics into value- added hydrocarbons. He has prepared several catalysts and thrown light on the structure–activity relationships of novel catalytic materials for hydrotreatment of fossil-based crudes. In view of his expertise, he is on the editorial board of three international peer-reviewed journals and editor for two books from Elsevier and CRC. Dr. Bhaskar received the Distinguished Researcher award from The National Institute of Advanced Industrial Science and Technology (AIST) (2013), Japan, and the Most Progressive Researcher award from Research Association for Feedstock Recycling of Plastics (FSRJ), Japan (2008). He is also the Fellow of Biotech Research Society of India (FBRS) and member of the Board of Directors (BRSI). He received the Raman Research Fellowship for the year 2013–2014. He was also a JSPS Visiting Scientist to the Tokyo Institute of Technology, Japan, during 2009. He has organized several international symposia in India and abroad in this area of expertise and has visited several countries to deliver invited/plenary lectures, for collaborative research and also as a subject expert.