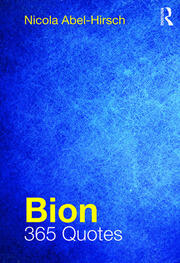 This is a book of 365 quotes from the work of the psychoanalyst Wilfred Bion. Something of an enigma, Bion often doesn't write in the way one would expect of a psychoanalyst, but is being read ever-increasingly around the world, in and outside the psychoanalytic community. Certain of his comments are often quoted, whilst swathes of his work lie almost untouched. How to make some of the detail of this work available? What he writes is often dense in the way the structure of a poem can be, and the book has the format of a 'poem a day' collection – providing a way into his complete work one quote at a time. Alongside commentaries by Abel-Hirsch are thoughts on Bion's work drawn from papers by other analysts from the UK, the Americas, and Europe. The book is structured in a way that will inform and interest the general reader as well as giving something new to psychoanalysts and others who already know his work well.

Introduction to the book

A Map of Bion’s Work

Nicola Abel-Hirsch is a training and supervising analyst of the British Psychoanalytical Society and works in private practice in London. She has given clinical and theoretical papers and seminars on Bion in the UK; Taiwan (annually 2005–2012); the USA, and Europe. From 2013–2015 she was the visiting professor at the Centre for Psychoanalytic Studies, University of Essex. Her publications include Eros (2001); ‘The Life Instinct’, in The International Journal of Psychoanalysis (2010); ‘A Note and a Short Story’, in The Bion Tradition (ed. Levine and Civitarese, 2015); ‘The Devil is in the Detail’, in The Melanie Klein Tradition (ed. Garvey and Long, 2017); and ‘How Bion’s work on thinking throws light on the development of sexuality’, in Psychoanalytic Inquiry (2018). She is the editor of Hanna Segal’s last book, Yesterday, Today and Tomorrow (2007).

"This is an extraordinary book, 365 quotes from Bion’s writings. It is not a very familiar format. Mostly academic and clinical writing makes a case for a particular point or view and a conclusion. And then quotations from other sources are used to strengthen or illustrate that argument. But here it is the other way around, the quotations are the groundwork from which important conclusions are then drawn.
One could say it is therefore something of an inside-out book. But in fact I might say it is more like the clinical method itself, rather than clinical writing. In clinical work we take significant statements - dreams, certain free associations, etc - and draw out conclusions for our patients. Just as we might see Nicola drawing out significant thoughts and issues from these moments of clarity in Bion’s opus." --Robert Hinshelwood, Professor of Psychoanalytic Studies at the University of Essex, British Psychoanalytical Society and The Institute of Psychoanalysis

"One of the quotations in this book indicates the distinction between writing a book and making one. This is a well made work-book to which the reader interested in Bion’s thinking can return again and again, not in a linear and category-bound manner but instead searching, like the title of the lost 1963 album of jazz musician Coltrane, creates the potential for reading ‘from both directions at once’, and so it is very definitely not simply a compilation of interesting quotations from an influential thinker. In some ways it is like an extension to Bion’s posthumously published book ‘Cogitations’, but with added, cross-referenced and highly informative commentaries. I feel sure that it will introduce to all its readers, as it did to me, fresh perspectives on his work, as well as new information, however much has already been gleaned. It will renew interest in the autobiographical writings, which are on the whole more reliable than existing biographical works, and it may spark a renewed interest in his allusive three volume novel, The Memoir of the Future. I recommend it highly to all those seeking fertile questions in psychoanalysis." --Chris Mawson, Editor, The Complete Work of W.R.Bion, British Psychoanalytical Society and The Institute of Psychoanalysis

"Bion’s seminal influence on twenty first century psychoanalysis is now very evident. But many people find his writing difficult to read and may be intimidated by the "Complete Works" edited by Chris Mawson. Here is a splendid collation of quotations that offer much more than a taste of Bion: more of a well digested meal. If it provides a sense of his thinking - good. If it stimulates further reading even better." --Ronald Britton, Former President, British Psychoanalytical Society and The Institute of Psychoanalysis

"I warmly recommend this book which has a very helpful new format, contextualising Bion's quotes with descriptions of the relevant moment in his life, notes on the characters that appear in them, short but very clear  theoretical discussions of the various new concepts as they appear, as well as vivid clinical vignettes by Nicola herself and other colleagues." --Ignês Sodré, British Psychoanalytical Society and The Institute of Psychoanalysis

"I initially imagined a ‘coffee table book’, but reading the book I thought: Yes, what a good idea to start with the quotes and to explore them fully and rigorously! And what an idea for this to come from someone so knowledgeable, sane and readable on her subject as Nicola Abel-Hirsch. Bion was an extraordinary mixture of the passionate and the almost deadpan. His style was, I think, particularly British of an immediate post-war era, one of its best forms, old-school; explorations in the wilderness contained within careful, disciplined prose. I recommend the book as a treasure-house of profundities, self-questioning and restless development, interlinked with wise and insightful contextualisation and judgment." --Michael Brearley, Former President, British Psychoanalytical Society and The Institute of Psychoanalysis (and former Captain of the English Cricket Team and author of The Art of Captaincy)