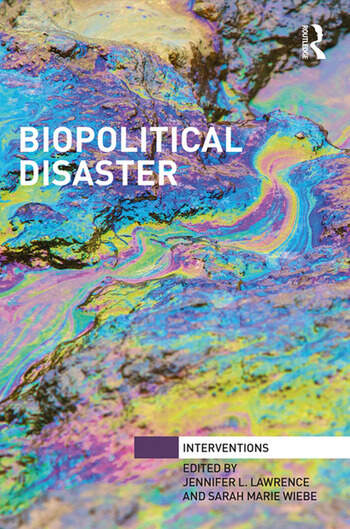 Biopolitical Disaster employs a grounded analysis of the production and lived-experience of biopolitical life in order to illustrate how disaster production and response are intimately interconnected. The book is organized into four parts, each revealing how socio-environmental consequences of instrumentalist environmentalities produce disastrous settings and political experiences that are evident in our contemporary world.

Beginning with "Commodifying crisis," the volume focuses on the inherent production of disaster that is bound to the crisis tendency of capitalism. The second part, "Governmentalities of disaster," addresses material and discursive questions of governance, the role of the state, as well as questions of democracy. This part explores the linkage between problematic environmental rationalities and policies. Third, the volume considers how and where the (de)valuation of life itself takes shape within the theme of "Affected bodies," and investigates the corporeal impacts of disastrous biopolitics. The final part, "Environmental aesthetics and resistance," fuses concepts from affect theory, feminist studies, post-positivism, and contemporary political theory to identify sites and practices of political resistance to biopower.

Chapter 3: "Life as Half Lives: The Nuclear Condition and Biopolitical Disaster"

Chapter 4: "Even Natural Disasters Are Unlikely to Slow Us Down...": Corporate Social & Environmental Responsibility as Well-Crafted Political Judgment"

Chapter 5: "The Governmentality of Disaster Resilience"

Chapter 7: "Politics of re-radicalising the Deracinated as Invasive Species: Human Displacement, Environmental Disasters of State Enclosures and the Irradicability of Biodiversity"

Chapter 9: "Marginally Managed: ‘Letting Die’ and Fighting Back in the Oil Sands

Chapter 10: "Of Course They Count, But Not Right Now:" Regulating Precarity In Lee Maracle’s Ravensong and Celia’s Song

Chapter 11: "Life at All Costs: The Biopolitics of Chemotherapy in Contemporary Telivision and Film"

Chapter 13: "The Underestimated Power Effects of the Discourses and Practices of the Food Justice Movement"

Chapter 14: "Interrogating the Disastrous Biopolitics of the Sustainable Development-Resilience Nexus"

Chapter 15: "The Aesthetics of Triage: Towards Life Beyond Survival"