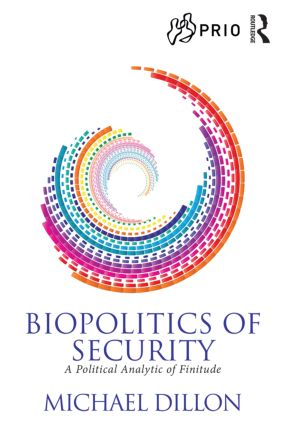 Taking its inspiration from Michel Foucault, this volume of essays integrates the analysis of security into the study of modern political and cultural theory.

Explaining how both politics and security are differently problematised by changing accounts of time, the work shows how, during the course of the 17th century, the problematisation of government and rule became newly enframed by a novel account of time and human finitude, which it calls ‘factical finitude’. The correlate of factical finitude is the infinite, and the book explains how the problematisation of politics and security became that of securing the infinite government of finite things. It then explains how concrete political form was given to factical finitude by a combination of geopolitics and biopolitics. Modern sovereignty required the services of biopolitics from the very beginning. The essays explain how these politics of security arose at the same time, changed together, and have remained closely allied ever since. In particular, the book explains how biopolitics of security changed in response to the molecularisation and digitalisation of Life, and demonstrates how this has given rise to the dangers and contradictions of 21st century security politics.

This book will be of much interest to students of political and cultural theory, critical security studies and International Relations.

‘No one writing about security issues is as philosophically astute, conceptually innovative, politically attuned, and eloquent as Michael Dillon. Everyone in academic, journalism, and policy communities concerned with security thinking should read Biopolitics of Security.’--Michael J. Shapiro, University of Hawai’i, Manoa, USA

'Biopolitics of Security confirms Michael Dillon's place as both the foremost critic and exponent of political theology writing today. Departing from an analysis of baroque artifice as a response to the death of the Christian God, Dillon shows how the retreat of God as the locus of infinity and source of salvation is succeeded by an infinity of endings that reduce individual lives to insignificance and prompt a desperate self-assertion contained by the security state or katechon. Yet he also shows how this stubborn persistence of infinite life also points beyond the baroque theatrical scenario of martyrs, tyrants and intriguers to other ways of living with power. His analyses of the temporal structures of life and power thus fundamentally question the baroque alignments of sovereignty and government that have until now both secured and ruined our lives.’ – Howard Caygill, Kingston University, UK

Michael Dillon is Emeritus Professor of Politics and International Relations at Lancaster University. He has written extensively on international political theory, continental philosophy, security and war and cultural research.

The aim of this book series is to gather state-of-the-art theoretical reflection and empirical research into a core set of volumes that respond vigorously and dynamically to  new challenges to security studies scholarship. This series is now being published under the title Routledge New Security Studies.