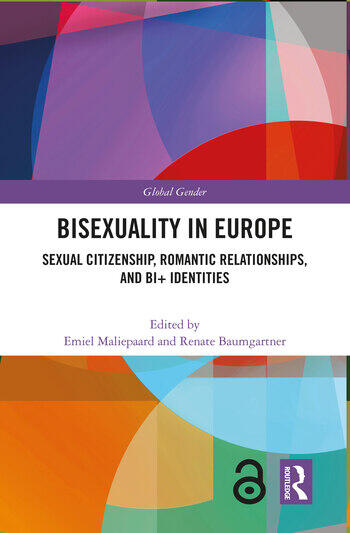 Bisexuality in Europe offers an accessible and diverse overview of research on bisexuality and bi+ people in Europe, providing a foundation for theorising and empirical work on plurisexual orientations and identities, and the experiences and realities of people who desire more than one sex or gender

Counteracting the predominance of work on bisexuality based in Ango-American contexts, this collection of fifteen contributions from both early-career and more senior academics reflects the current state of research in Europe on bisexuality and people who desire more than one sex or gender. The book is structured around three interlinked themes that resonate well with the international research frontiers of bisexual theorising: bisexual citizenship, intimate relationships, and bisexual+ identities. This book is the first of its kind in bringing together research from various European countries including Austria, Finland, Italy, the Netherlands, and Scandinavian countries, as well as from Europe as a wider geographical region.. Topics include pansexual identity, non-monogomies, asylum seekers and youth cultures.

This is an essential collection for students, early career researchers, and more senior academics in Gender Studies, LGBTQI Studies and Sexuality Studies.

Chapter One: Bisexuality in Europe: Introduction to the field and this book

Chapter Three: The bisexual movement in the Netherlands: Developments and experiences of key bi activists since the 1990s

Chapter Six: The becoming of family relationships and friendship circles after a bisexual break-up

Chapter Eight: "I think that I’m not a relationship person": Bisexual women’s accounts of (internalised) binegativity in non-monogamous relationship narratives

Chapter Ten: Forms of bisexual injustice: Bi, being, and becoming a knower

Chapter Eleven: Bisexuality as an identity and as a conceptual tool in sexual politics in Finland

Emiel Maliepaard is a researcher at Atria: Institute on Gender Equality. His work on the lived experiences of bisexual people has been published in, among others, ‘Social and Cultural Geography’, ‘Sexualities’, ‘Journal of Bisexuality, and ‘Tijdschrift voor Economische en Sociale Geografie.’ Emiel has a special interest in social ontologies and theories such as practice theories. He, organised (with Dr. Caroline Walters) the ‘First European Bisexuality Research Conference’ (2016), edited a special issue of the ‘Journal of Bisexuality’ on (inter)national research frontiers in Europe, and wrote guidelines for bi inclusivity in Dutch (LGBT) organizations, health care services, and (government) policies. Finally, he is also involved in projects on sexual and (ex)partner violence.

is a sociologist and pharmacist. She currently works in sociology of sexualities and sociology of science and technology. Her work on bisexuality has been published in ‘Psychology of Sexualities Review.’ She was a lead author of the research corner in Robyn Ochs’ magazine ‘Bisexual Women Quarterly.’ Renate has published in various fields including pharmacology and medicine. She currently works as a Postdoctoral Researcher at the University of Tübingen (Germany), where she pursues a project on discrimination and fairness in artificial intelligence in medicine.