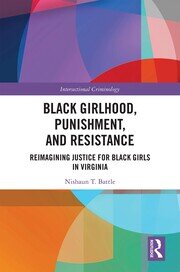 Black Girlhood, Punishment, and Resistance: Reimagining Justice for Black Girls in Virginia provides a historical comprehensive examination of racialized, classed, and gendered punishment of Black girls in Virginia during the early twentieth century. It looks at the ways in which the court system punished Black girls based upon societal accepted norms of punishment, hinged on a notion that they were to be viewed and treated as adults within the criminal legal system. Further, the book explores the role of Black Club women and girls as agents of resistance against injustice by shaping a social justice framework and praxis for Black girls and by examining the establishment of the Virginia Industrial School for Colored Girls. This school was established by the Virginia State Federation of Colored Women’s Clubs and its first President, Janie Porter Barrett.

This book advances contemporary criminological understanding of punishment by locating the historical origins of an environment normalizing unequal justice. It draws from a specific focus on Janie Porter Barrett and the Virginia Industrial School for Colored Girls; a groundbreaking court case of the first female to be executed in Virginia; historical newspapers; and Black Women’s Club archives to highlight the complexities of Black girls’ experiences within the criminal justice system and spaces created to promote social justice for these girls. The historical approach unearths the justice system’s role in crafting the pervasive devaluation of Black girlhood through racialized, gendered, and economic-based punishment. Second, it offers insight into the ways in which, historically, Black women have contributed to what the book conceptualizes as “resistance criminology,” offering policy implications for transformative social and legal justice for Black girls and girls of color impacted by violence and punishment. Finally, it offers a lens to explore Black girl resistance strategies, through the lens of the Black Girlhood Justice framework.

Black Girlhood, Punishment, and Resistance uses a historical intersectionality framework to provide a comprehensive overview of cultural, socioeconomic, and legal infrastructures as they relate to the punishment of Black girls. The research illustrates how the presumption of guilt of Black people shaped the ways that punishment and the creation of deviant Black female identities were legally sanctioned. It is essential reading for academics and students researching and studying crime, criminal justice, theoretical criminology, women’s studies, Black girlhood studies, history, gender, race, and socioeconomic class. It is also intended for social justice organizations, community leaders, and activists engaged in promoting social and legal justice for the youth.

Nishaun T. Battle, Ph.D., was born and raised in Southern California and earned her Doctorate in Sociology with concentrations in Criminology and Social Inequality and a certificate in Women’s Studies in at Howard University. She is an Assistant Professor of Criminal Justice at Virginia State University, in Petersburg, Virginia. She is a scholar–artist activist whose research explores lived and historical experiences of resistance by Black girls, community activism, and State violence.

"This transformative text illustrates Nishaun Battle’s strength as a scholar-activist, forging a path for academics, practitioners, and activists to connect historical trajectories of pain with contemporary struggles, nuancing Black girls’ rage and joy. In this way, Battle maps these racialized and gendered practices stemming from the Reconstruction era to explicating these subtle machinations of White supremacy in the current context of racialized, hypercriminalization of Black girls. Battle explores these practices as historically, politically, socially, and culturally rooted within plantation violence, but aestheticized in new ways with each revolving loop of state sanctioned violence - continuing the trap of Black girls as cogs in our (in)justice system. Evoking Black feminism, intersectionality, Crunk feminism, critical race theory, critical historiography, and other radical foundations, Black Girlhood, Punishment, and Resistance pushes forward a framework Battle terms "Historical Intersectional Criminology," propelling us towards intersectional futures, with her pedagogical prowess, incorporating an interdisciplinary, intersectional, framework grounded in self-reflection."
– Kishonna Gray-Denson, Assistant Professor in Communication and Gender and Women's Studies at the University of Illinois at Chicago

"Nishaun Battle continues efforts to inform history of the role played by African Americans in the establishment of juvenile institutions for youth of color. With particular attention to the Black women who led the battle and the Children, boys AND girls, who benefitted by being separated from adult offenders Dr. Battle has contributed to lifting the veil and expanding the conversation. Moreover, the focus on Janie Porter provides additional insight into the delicate balance that African American reformers had to walk to move forward with their efforts to improve the condition of African American youth in the juvenile justice system."

– Vernetta Young, Professor of Criminology in the Department of Sociology and Criminology at Howard University

"Nishaun Battle has identified an important and largely overlooked case that allows for a direct thread to current treatment of Black women/girls in the justice system."

– Katheryn Russell-Brown, Levin, Mabie & Levin Professor and Director of the Center for the Study of Race and Race Relations at the University of Florida, Levin College of Law