Black Leaders and Ideologies in the South
Resistance and Non-Violence 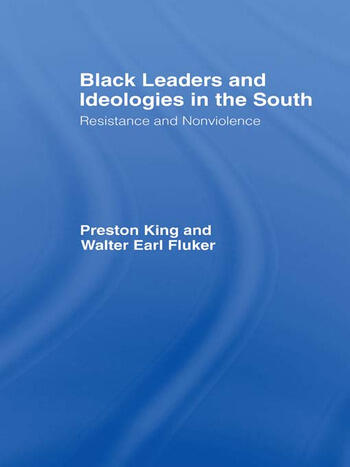 Black Leaders and Ideologies in the South: Resistance and Non-Violence

Frederick Douglass, Booker Washington and Ida Wells. Thurgood Marshall and Martin King are focused upon, together with Howard Thurman, Richard Wright, Fred Gray and Barbara Jordan. All are important in various ways to the movements this book seeks out. From the perspective of liberation, the two high points in the African-American Odyssey are marked by Emancipation in the nineteenth century and Desegregation in the twentieth. Douglass bestriding the first, King and Marshall the second.

The thread of resistance runs through most of these philosophical profiles, and the thread of non-violence, with greater or less force, also runs throughout. This volume assumes a distinction between (a) an earlier period when Afro-America was more cohesive and collectively committed to self-improvement despite the odds, and (b) the contemporary period, beyond desegregation, marked by rates never previously rivaled of suicide, joblessness, imprisonment, despair and alienation, especially among black poor. The life stories and philosophies presented here make fascinating reading.

This book is a Special Issue of the leading journal, Critical Review of International Social and Political Philosophy.

Preface  1. Theory in History: Foundations of Resistance and Non-Violence in the American South  2. Frederick Douglass and the Ideology of Resistance  3. Booker Washington: 'We Wear the Mask'  4. Ida Wells and the Management of Violence  5.    Dangerous Memories and Redemptive Possibilities:  Reflections on the Life and Work of Howard Thurman  6. Thurgood Marshall’s Pursuit of Equality Through Law  7. Richard Wright and Black Radical Discourse: The Advocacy of Violence  8. Martin Luther King: Resistance, Non-Violence and Community  9. Destroying Everything Segregated I Could Find Fred Gray and the Legal Campaign for Integration in Alabama  10. Barbara Jordan: The Politics of Insertion and Accommodation

Walter Earl Fluker is Coca Cola Professor of Leadership Studies, Professor of Philosophy and Religion, and Director of the Leadership Center at Morehouse College. He has held positions at Harvard, Vanderbilt, and elsewhere.