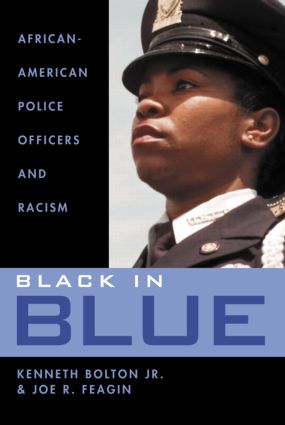 From New York to Los Angeles, police departments across the country are consistently accused of racism. Although historically white police precincts have been slowly integrating over the past few decades, African-American officers still encounter racism on the job. Bolton and Feagin have interviewed fifty veteran African-American police officers to provide real-life and vivid examples of the difficulties and discrimination these officers face everyday inside and outside the police station from barriers in hiring and getting promoted to lack of trust from citizens and members of black community.

"In their thoughtful qualitative analysis, Bolton and Feagin tackle an important, though largely overlooked topic--the lived experiences of Black police officers. Their research exposes the personal and social costs of men in blue engaging in business as usual." - Katheryn Russell-Brown, University of Florida

1. Black in Blue 2. Everyday Racism on the Force 3. Problems of the White Mind 4. Racial Barriers in Police Departments 5. A Hostile Racial Climate 6. Black Officers Can Transform Policing 7. A Better Future for All Americans

Joe Feagin is Professor of Sociology at the Texas A&M University. He is a past president of the American Sociological Association. Among his many Routledge books are: White Racism (2nd edition, 2001), Racist America: Roots, Current Realities, and Future Reparations (2000), and The Agony of Education: Black Students at White Colleges and Universities (1996).