Blackwashing Homophobia
Violence and the Politics of Sexuality, Gender and Race 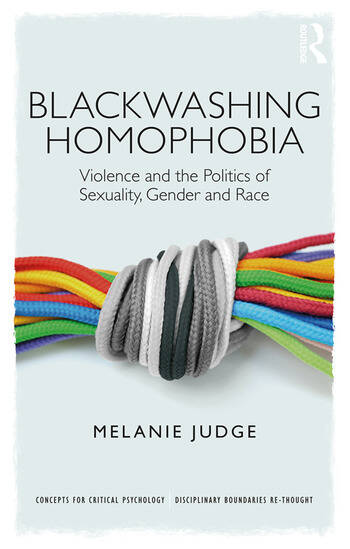 Blackwashing Homophobia: Violence and the Politics of Sexuality, Gender and Race

As lesbian, gay, bisexual, transgender and intersex identities increasingly secure legal recognition across the globe, these formal equality gains are contradicted by the continued presence of violence. Such violence emerges as a political pressure point for contestations of identity and power within wider systems of global and local inequality. Discourses of homophobia-related violence constitute subjectivities that enact violence and that are rendered vulnerable to it, as well as shaping political possibilities to act against violence.

Blackwashing Homophobia critiques prevailing discourses through which violence and its queer targets are normatively understood, exploring the knowledge regimes in which multiple forms of othering are both reproduced and/or resisted. This book draws on primary research on lesbian subjectivity and violence in South Africa examining the intersections of sexual, gender, race and class identities, and the contemporary politics of violence in a postcolonial context:

• What are the contending ways of knowing queers and the violence they face?

• How are the causes, characters, consequence of, and ‘cures’ for, violence constructed through such knowledges and what are their power effects?

The book explores these questions and their implications for how violence, as an instrument of power, might be countered.

Blackwashing Homophobia is a timely intervention for theorising the discourse of homophobia-related violence and what it reveals and conceals, enables and hinders, in relation to queer identities and political imaginaries in times of violence. The book’s interdisciplinary approach to the topic will appeal to social and political scientists, philosophers and psychology professionals, as well as to advanced psychology undergraduates and postgraduates alike.

Introduction: (Un)settling Violence  Chapter 1. "Double the Trouble": Gender and Sexuality (Un)corrected  Chapter 2. The Violence of Racialisation, The Racialisation of Violence  Chapter 3. View to a Kill: The Politics of Spectacle  Chapter 4. Assimilation and Ascendance: Violent Differentiation in Post-Colonial Context  Chapter 5. Law, Education and a Not-Only LGBT Revolution  Conclusion: Trouble the Dreams of Political Possibility

Melanie Judge is a queer and feminist activist, and Adjunct Associate Professor, and research associate at the Centre for Law and Society, in the Faculty of Law at the University of Cape Town.