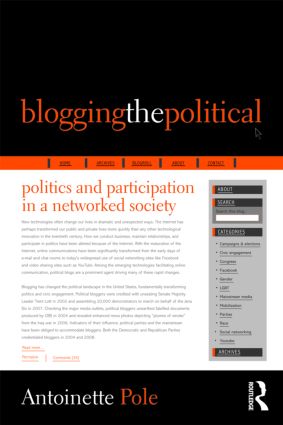 Politics and Participation in a Networked Society, 1st Edition

The popular blog-tracking site technorati.com reports the existance of well over one hundred million blogs. Despite the medium’s ubiquity, the impact of political blogging on politics and civic engagemment has not been systematically examined. In an era of depressed civic engagement, where access to the media by common citizens is limited, blogs have the power to change the political landscape.

Blogging the Political catalogs the individuals engaged in political blogging, explains why they started blogging, and examines what they hope to gain from it. The larger question at hand is whether and how political blogging facilitates civic engagement and mobilization in the United States. Do political bloggers participate in politics only through blogging or also through more traditional activities such as voting or sending an email to an elected official? Do they encourage their readers to undertake political activities, and how do they go about doing so? Examining the activity of a diverse spectrum of bloggers, Pole concludes that blogging is indeed a new and important form of political participation, one that can potentially transform politics and lead to increased civic engagement.

"Through her extensive array of interviews, Antoinette Pole has given us a rare glimpse into the mind of political bloggers. She illuminates the world of blogging from the perspective of the bloggers—both the well known and the largely anonymous—who inhabit and shape it. In addition, she offers important insights on how members of Congress and presidential candidates use blogs for constituent and campaign communication. Pole’s assertions about how blogs may change political participation are thoughtful and intriguing and constitute a significant contribution to the debate about how this new communication form will impact American politics."

"Among the aspects of the Internet with the greatest potential for transforming politics is the rapid growth of blogging. Antoinette Pole shines a light into several corners of the blogosphere—discussing African-American, Latino, women, and LGBT bloggers along with blogging by members of Congress and presidential candidates—and considers the meaning for democracy of the developments she documents."

"With detail and precision, Blogging the Political explains who blogs about politics and why, filling an important gap for scholars interested in this emerging and often misunderstood phenomenon."