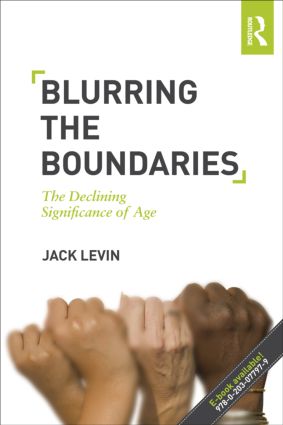 Over the decades, the lines separating young- middle-aged-, and older adults have blurred, as indicated by a broadening of the appropriate years for making life decisions. Not only are many people marrying later, but some are marrying earlier than ever. Overall, women giving birth later, but some are having children earlier in their lives. Older people are retiring later, but some are retiring at a younger age. The spread or variability (standard deviation) of age-based decisions has increased substantially, giving adults greater freedom from the traditional constraints of age. With these relaxed age norms has come a host of related social problems. The relaxation of age norms for adult decision-making has inadvertently blurred the boundaries between adults and teenagers, between teenagers and children. This generalization of the phenomenon throughout the life cycle is responsible for the adultification of childhood.

Eight year old girls are, to an increasing extent, being treated as sexual objects; bullying peaks in the 6th grade; larger numbers of girls are having oral sex or sexual intercourse by the age of 15; the pregnancy rate for girls 13-15 is on the rise; we are in the process of dismantling the juvenile justice system in favor of adult forms of punishment; and more and more children are left without adult supervision in the afternoons, as though they were miniature adults who are capable of raising themselves.

Jack Levin is the American Sociological Association’s 2009 Winner of the “Public Understanding of Sociology” Award. This short book communicates the power and importance of sociological thinking to major, worldwide social trends. Ideal for use in undergraduate courses such as introductory sociology, social problems, and social change as well as more advanced courses in population, or sociology of aging.

"At first glance, Jack Levin's book, Blurring the Boundaries: The Declining Significance of Age, promises to be a brief monograph about the growing irrelevance of chronological age as a meaningful "yardstick" that guides the unfolding of our lives. Life course research has had its ear to the growth of age irrelevance for a while now—many researchers attending to the relationship between social location and the timing of particular events and transitions. Blurring the Boundaries, however, covers a broader range of territory than the title suggests. Levin's book provides an analysis of how a variety of normative behaviors and transitions, some associated with certain chronological ages and particular stages of life, have shifted over the past five decades. A secondary yet powerful theme attends to the role of the early baby boomers (i.e., those born between 1946 and 1955) as harbingers of these changes. Levin interweaves personal vignettes throughout his narrative, which focuses primarily on the behaviors and transitions associated with children and young adults. This book is an appealing selection for scholars of aging and the life course because Levin's analyses incorporate several dimensions of age, including chronological age, period, cohort, and life stage."

"Levin’s slim book packs some provocative punches, including its central thesis: that many features of American life today—good and bad—can be traced to the early baby boomers and the turbulence of the 1960s. In relaxing the rules, boomers liberated us from chains of tradition, permitting us to craft our lives as we wish and breaking down ageism, sexism, and racism. But in cutting us free, boomers also unleashed the range of morally acceptable conduct and tolerable incivilities. It doesn’t matter whether you love or loathe the boomers: this book is sure to push your buttons."

"Using the first wave of the baby boomers as a starting point to analyze changes in American social norms since the 1960s, Levin has written an entertaining, provocative, and pithy account of how we moved from the Age of Aquarius to the age of gender equality, grade inflation, and incivility. Using personal anecdotes to engage readers in an already well-written text, this is an excellent addition to any reading list on a variety of courses, especially Sociology of the Life Course, Social Gerontology, or Sociology of Aging."

"I marvel at Levin’s ability to provide just the right blend between personal vignettes and factual material on the various issues addressed. This is done in such a way to draw students in without overwhelming them. Once started this is not a book readers will want to put down."

This book is about much more than the title implies. Among other things, it deals with the Baby Boomers, ageism, the Youth Cult, sex, cheating, and all written with a sprightly style that makes it easy to read. He backs up his observations with juicy examples as well as hard statistics. It is a "must read" for social gerontologists as well as recommended reading for social scientists, modern historians, educators, counselors, social workers, and parents. —Erdman Palmore, MedicalSociology, Duke University

In this compelling book, Dr. Jack Levin makes a convincing argument about the sociological forces that lie behind the contemporary waning of age norms, from infancy to late adulthood. Written in an engaging and clear narrative style, this is an indispensable book for any university course on the sociology of aging"—Marta Rodríguez-Galán, Sociology, St. John Fisher College

Jack Levin has written a thought-provoking, incisive, and powerful analysis of the implications of the blurring of traditional age boundaries, and the social significance of an age-related social problem of our time. He highlights the problems and provides solutions for solving them. There is something in this well-researched book is for everyone who is interested in our children, and the future generations of this country. A must-read book in and outside the classroom.—Augustine A. Aryee, Sociology, Fitchburg State University

" very much enjoyed Blurring the Boundaries and believe it makes a valuable contribution… Levin has crafted a volume that both scholars and the general public couldlearn from.— Ralph LaRossa, PhD, Georgia State University

CHAPTER ONE: THE RELAXATION OF RULES

Norms for Public versus Private Interaction

CHAPTER THREE: A CULT OF YOUTH

Aging of the First-Wave Boomers

The Boomers Continue to Bloom

The Demise of Ageism?

Blurring the Boundaries of Age

The Timing of Major Life Events

"Get Me to the Church on Time"

Participating in the Arts

A New Stage of Life?

CHAPTER FIVE: WHAT HAS KEPT THE BOOMER CHANGES GOING?

CHAPTER SIX: THE EROSION OF CHILDHOOD

Generalizing the Relaxation of Norms

CHAPTER SEVEN: FACTORS CONTRIBUTING TO THE

The Benefits of Blurred Boundaries

Jack Levin is the Irving and Betty Brudnick Professor in the Department of Sociology at Northeastern University, where he co-directs its Center on Conflict and Violence and teaches courses on the sociology of violence and hate. Levin is well-known for his work in the area of criminology. He has authored or co-authored a number of books including Serial Killers and Sadistic Murderers—Up Close and Personal and The Violence of Hate.

It is less known that Levin also has had a longstanding interest in social gerontology, having written on age and aging for articles in the Gerontologist, Research on Aging, International Journal of Aging and Human Development, Aging, Sociological Forum, Youth and Society, and Journal of Research in Education and co-authoring (with William J. Levin) the book, Ageism: Prejudice and Discrimination Against the Elderly. Levin has also published opinion articles in newspapers including the Boston Globe, the New York Times, the Chicago Tribune, USA Today, the Christian Science Monitor, the Washington Post, the Dallas Morning News, and the Philadelphia Inquirer.

Levin was recently a recipient of the following awards: In 2004-2005, the Eastern Sociological Society’s Robin Williams Distinguished Lectureship; In 2009, the Apple Award for Exemplary Contributions to the Teaching of Sociology by the New England Sociological Association; In 2009-2010, the Public Understanding of Sociology Award by the American Sociological Association; and in 2011, the Lester F. Ward Distinguished Contribution to Applied and Clinical Sociology Award by the Association for Applied and Clinical Sociology.