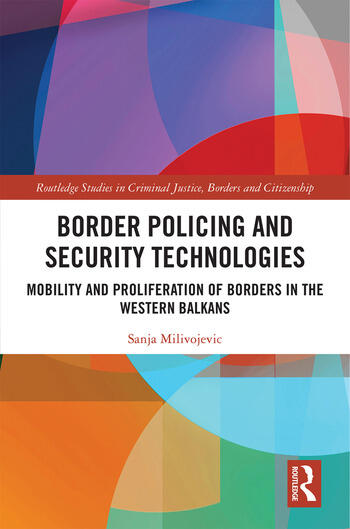 Border Policing and Security Technologies: Mobility and Proliferation of Borders in the Western Balkans

This book is a unique and original examination of borders and bordering practices in the Western Balkans prior to, during, and after the migrant "crisis" of the 2010s. Based on extensive, mixed-method, exploratory research in Serbia, Croatia, FYR Macedonia, and Kosovo, the book charts technological and human interventions deployed in this region that simultaneously enable and hinder the mobility projects of border crossers.

Within the rich historical context of the Balkan Wars and subsequent displacement of many people from the region and beyond, this book discusses the types and locations of borders as well as their development, transformation, and impact on people on the move. These border crossers fall into three distinct categories: people from the Middle East, Africa, and Asia transiting the region; citizens of the Western Balkans seeking asylum and access to labour markets in the EU; and women border crossers. This book also maps border struggles that follow these processes, analyses the creation of labour "reserves" in the region, and examines the role that technology – in particular smartphones and social media - play in regulating mobility and creating social change. This volume also explores the role of the EU in, and the impact of the aforementioned processes on nation-states of the Western Balkans, their European future, and mobility in the region.

Whilst the book focusses on a particular region in Southeast Europe, its findings can be easily applied to other social contexts and settings. It will be particularly useful to academics and postgraduate students studying social sciences such as criminology, sociology, legal studies, law, international relations, political science, and gender studies. It will also be useful for legal practitioners, NGO activists, and government officials.

Sanja Milivojevic is a Senior Lecturer in Criminology at La Trobe, Melbourne, Australia. Sanja’s research interests are borders and mobility, security technologies, surveillance and crime, gender and victimisation, and international criminal justice and human rights. She is Associate Director of Border Criminologies at Oxford University and editorial board member for the journal Temida (Serbia). Sanja publishes in English and Serbian. Her latest book, co-authored with Marie Segrave and Sharon Pickering, is Sex Trafficking and Modern Slavery: The Absence of Evidence (Routledge 2017).

"Border Policing and Security Technologies is a tour de force of the bordering of the Balkans and remedies their neglect in the burgeoning field of borders and migration. The everyday borders of this region, in all their many forms, is brought to life through the finest empirical and theoretical interplay. This is a must read for everyone concerned with how powerfully the edges of Europe speak to the crisis of the centre, and challenges us to go well beyond our concern with the North and the South."

"Milivojevic lucidly unpacks the historical and contemporary interdependencies between the Western Balkans and the European Union through a fresh lens of border control. Her multi-sited ethnographic research shows the pivotal role that policing, security and technology play in the Europeanization of the region as Serbia and FYR Macadonia "become the policemen" for Europe, patrolling the external borders, conducting migration control, and keeping unwanted border crossers out. But perhaps more importantly, Border Policing and Security Technologies highlights the complex technology-human-migration intersections that can act as counter claims, counter movements and ways out of the current border regimes based on violence and exclusion."