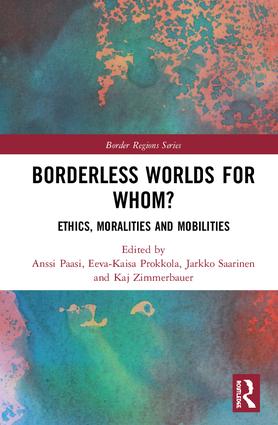 Borderless Worlds for Whom?

The optimism heralded by the end of the Cold War and the idea of an emerging borderless world was soon shadowed by conflicts, wars, terrorism, and new border walls. Migrants, asylum seekers, and refugees have simultaneously become key political figures. Border and mobility studies are now two sides of the same coin.

The chapters of this volume reflect the changing relations between borders, bordering practices, and mobilities. They provide both theoretical insights and contextual knowledge on how borders, bordering practices, and ethical issues come together in mobilities. The chapters scrutinize how bounded (territorial) and open/networked (relational) spaces manifest in various contexts. The first section, ‘Borders in a borderless world’, raises theoretical questions. The second, ‘Politics of inclusion and exclusion’, looks at bordering practices in the context of migration. The third section, ‘Contested mobilities and encounters’, focuses on tourism, which has been an ‘accepted’ form of mobility but which has recently become an object of critique because of overtourism. Section four, ‘Borders, security, politics’, examines bordering practices and security in the EU and beyond, highlighting how the migration/border politics nexus has become a national and supra-national political challenge.

The chapters of this interdisciplinary volume contribute both conceptually and empirically to understanding contemporary bordering practices and mobilities. It is essential reading for geographers, political scientists, sociologists, and international relations scholars interested in the contemporary meanings of borders and mobilities.

"This book could not be more timely as immigration becomes the issue that could break the European Union and border anxieties pervade the world of states. The book focuses on the neglected ethical dilemmas of borders: from the ways migrants are categorized as refugees and ‘economic’ migrants, for example, to the fact that tourism, one of the world's major industries by value-added, depends on easy border crossing even as others are excluded, and the idea of a world without borders as being necessarily more just than the one we presently have. If populist politicians would read more, including this book, they might rant less and reason more."

Anssi Paasi is Professor of Geography at the University of Oulu, Finland, and the Director of the RELATE Center of Excellence (Academy of Finland).

is Docent at the University of Oulu, Finland, and Scientific Coordinator in the RELATE Center of Excellence (Academy of Finland).