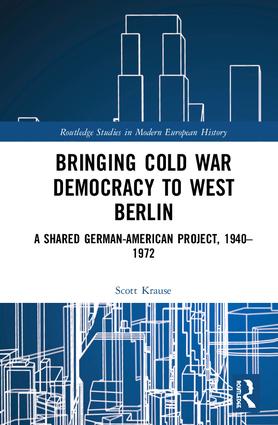 Within the span of a generation, Nazi Germany’s former capital, Berlin, found a new role as a symbol of freedom and resilient democracy in the Cold War. This book unearths how this remarkable transformation resulted from a network of liberal American occupation officials, and returned émigrés, or remigrés, of the Marxist Social Democratic Party (SPD).

This network derived from lengthy physical and political journeys. After fleeing Hitler, German-speaking self-professed "revolutionary socialists" emphasized "anti-totalitarianism" in New Deal America and contributed to its intelligence apparatus. These experiences made these remigrés especially adept at cultural translation in postwar Berlin against Stalinism.

This book provides a new explanation for the alignment of Germany’s principal left-wing party with the Western camp. While the Cold War has traditionally been analyzed from the perspective of decision makers in Moscow or Washington, this study demonstrates the agency of hitherto marginalized on the conflict’s first battlefield. Examining local political culture and social networks underscores how both Berliners and émigrés understood the East-West competition over the rubble that the Nazis left behind as a chance to reinvent themselves as democrats and cultural mediators, respectively. As this network popularized an anti-Communist, pro-Western Left, this book identifies how often ostracized émigrés made a crucial contribution to the Federal Republic of Germany’s democratization.

"It is a deeply researched book that makes it a worthwhile and illuminating read." - Volker Berghahn, Archiv fuer Sozialgeschichte

The dissertation on which this book is based won the Willy Brandt Prize for Contemporary History, 2017.

“Scott Krause's work delivers important insights into the Social Democratic exile and its contribution to the reconstitution of West Berlin. It allows an in-depth understanding of US occupation and Cold War policy at the time. We are delighted to award Scott Krause with the Willy Brandt Prize for Contemporary History”, Wolfgang Thierse, chairman the Federal Chancellor Willy Brandt Foundation's board of trustees.

The Willy Brandt Prize for Contemporary History is awarded every two years by the Federal Chancellor Willy Brandt Foundation to an outstanding academic paper, dissertation or habilitation. The work must focus on the work and legacy of Willy Brandt or on a specific chapter of contemporary history related to his name and his political life.

A note on naming conventions and language

Organization of the book

Decisions made and deferred at Potsdam, July 1945

The contested meaning of democracy

Support for "freedom" and origin of the Outpost network

Reconstitution of the Outpost network in West Berlin

Chapter 3: Rise of the Outpost narrative in the wake of the Berlin airlift, 1948‒1953

The Berlin airlift as embodiment of the Outpost narrative

The GDR’s obsession with RIAS

Reuter’s death and the network’s resilience

The emergence of Willy Brandt as new figurehead of the network

Brandt as new SPD candidate for a new West Berlin

Coordinated activities of the network

Broad acceptance of the narrative and creeping disillusionment of the network

Marginalization of the past in exile for national leadership in Bonn

Holdouts in Berlin facing a new generation of leftwing activists

Conclusion: Excavating the Outpost of Freedom on the Spree

Scott H. Krause is Max Kade Postdoctoral Fellow in the Berlin Program for Advanced German and European Studies at the Free University Berlin.