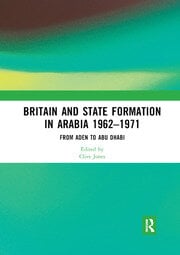 Britain and State Formation in Arabia 1962�1971: From Aden to Abu Dhabi

Half a century ago, Britain abandoned Aden, its last colonial outpost in the Arab world as its

attempt to establish a new polity foundered amid a rising tide of Arab nationalism, tribal

South Yemen. Yet just over three years later in 1971, a new state, the United Arab Emirates,

emerged in Arabia, formed from the old Trucial states over which Britain had long held

sway. At a time when state failure and fragmentation has become synonymous with much

contested issues, this comparative historical study of the varied British attempts at state

creation on the Arabian peninsula offers important insights into the limits of external ambition,

region. The legacy of British influence in Aden and Abu Dhabi still very much resonates

today; this volume explains why.

This book was originally published as a special issue of Middle Eastern Studies.

is Professor of Middle East Security at Durham University where he specialises in the history and politics of the Gulf and the Arab-Israeli conflict. He is a Fellow of the Royal Historical Society and his book, Britain and the Yemen Civil War 1962–1965 (2004/2010) was the subject of a BBC documentary.