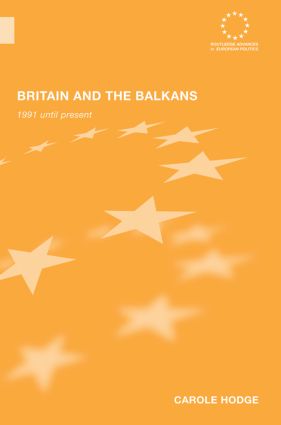 Britain and the Balkans

An incisive analysis of Britain's decision-making role in the Yugoslavian conflict of the 1990s and in the formation of its successor states.

Tracing the evolution of British policy from the onset of war in Croatia and Bosnia to the NATO action in Kosovo, and beyond, this major work examines the underlying factors governing that policy, and its role in shaping the international 'consensus'. British policy is examined through parliamentary proceedings in the House of Commons and Lords, as well as through evidence offered at select committees, reports from political and humanitarian agencies, private interviews with protagonists and media coverage, in relation to the situation on the ground and to policy development on the part of other leading world powers and institutions.

“The publication of Carole Hodge’s new book is a significant event for Yugoslav/post-Yugoslav studies and a major and brilliant contribution to the continuing debate about Western policy in the War of Yugoslav Succession… The book deserves a careful reading and is sure to influence future writing about the Western policies in the War of Yugoslav Succession and in the War for Kosovo. Students specializing in international policy in the southeast European region should put this book on their “must read” list.”

“For breadth, completeness and reliability of empirical sources, and for the quality of competent and detailed usage and understanding, as well as interpretation, this book represents the pinnacle in its category… In its results and reach, this book belongs to those very rare works which, without exaggeration, can be said to extend significantly the boundaries of existing knowledge.”

Review by Professor Milan Popovic, published in Monitor (May 2006)