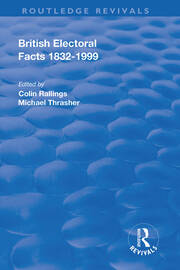 This title was first published in 2000:  This is a reference guide to British elections 1832-1999. It is a volume of electoral facts, which includes material on general elections, parliamentary by-elections, European Parliament elections, elections within the UK, local government elections, referendums, electoral irregularities, and public opinion polls.