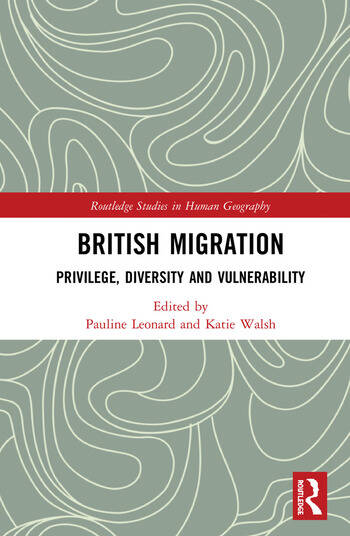 Around 5.6 million British nationals live outside the United Kingdom: the equivalent of one in every ten Britons. However, social science research, as well as public interest, has tended to focus more on the numbers of migrants entering the UK, rather than those leaving.

This book provides an important counterbalance, drawing on the latest empirical research and theoretical developments to offer a fascinating account of the lives, experiences and identities of British migrants living in a wide range of geographic locations across Europe, Asia, Africa and Australasia. This collection asks: What is the shape and significance of contemporary British migration? Who are today’s British migrants and how might we understand their everyday lives? Contributions uncover important questions in the context of global and national debates about the nature of citizenships, the ‘Brexit’ vote, deliberations surrounding mobility and freedom of movement, as well as national, racial and ethnic boundaries.

This book challenges conventional wisdoms about migration and enables new understandings about British migrants, their relations to historical privileges, international relations and sense of national identity. It will be valuable core reading to researchers and students across disciplines such as Geography, Sociology, Politics and International Relations.

2 Constellations of privilege: the racialised and classed formation of Britons living in rural France Michaela Benson

Pauline Leonard is Professor of Sociology at the University of Southampton, UK.

is Senior Lecturer in Human Geography at the University of Sussex, UK.