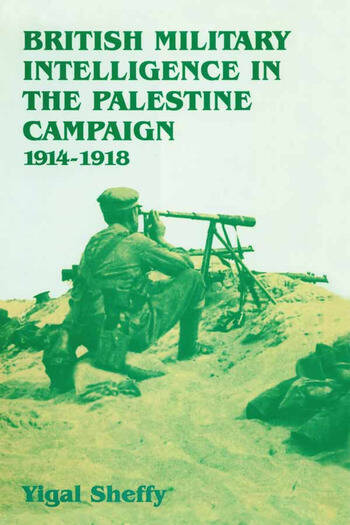 Shortly after the end of the First World War, General Sir George Macdonagh, wartime director of British Military Intelligence, revealed that Lord Allenby's victory in Palestine had never been in doubt because of the success of his intelligence service. Seventy-five years later this book explains Macdonagh's statement. Sheffy also adopts a novel approach to traditional heroes of the campaign such as T E Lawrence.

Contemporary Review - " a most valuable contribution to our understanding of what was called a "side show" of the Great War...a first rate study of military intelligence at work"

Bulletin of the Military Historical Society- "The first battle of Gaza was lost due to poor intelligence, but later improvements described in the book lent British commanders a distinct battlefield advantage, it contains good technical information on the early use of wireless."

Times Literary Supplement- "For those already familiar with the war, this rewarding little book will revise that image."

Ha"aretz - "Dr Yigal Sheffy"s book is a piece of good, old-fashioned research - the kind of thorough, in-depth study that makes a serious effort to reconstruct and analyze a historical period without a sideways glance at the ratings."

The International History Review-"Exhaustive and minutely detailed, it is written with the impersonal accuracy of a service manual. It is a work of outstanding scholarship; no other student need go over this ground again."

Cryptologia-" This book is the first scholarly work to focus purely on British military intelligence operations during the Crimean War. It is especially important because this war constitutes a significant chapter in the history of British intelligence."

Journal of Imperial and Commonwealth History, Vol 27, No 3, Sept 99

"Yigal Sheffy"s study of military intelligence joins a very short shelf of large-scale studies. ... It is to be welcomed, and not just for its rarity value. It is an admirably thorough, straightforward, professional piece of research, which may well claim to be the last word on its subject."