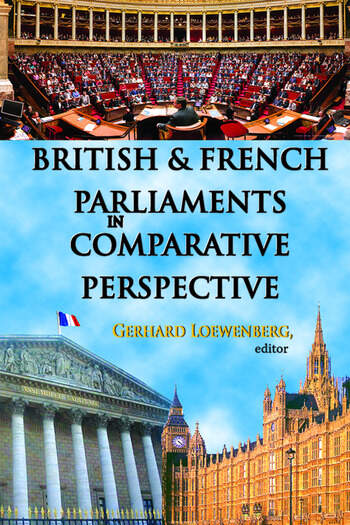 The representative assembly, or parliament, as it is most widely called, is at once an old, a ubiquitous, and a controversial political institution. In this century it has attracted the criticism of both disillusioned democrats and true believers in the superior representatives of mass movements or of charismatic leaders. Even among its supporters the institution is constantly the object of reform. This book deals with parliament (the generic term for what also may be known as legislature, congress, assembly, diet, or knesset), what it has been and is, what it does and should do, and what may become of it.

In a wide-ranging and excellently organized introductory essay, Loewenberg defines the parliamentary institution and discusses its role in modern times. He points out that since its appearance in the Middle Ages, the parliamentary system has been adopted by almost every country, including in recent years the newly independent nations of Africa and the Middle East. This essay is followed by differing and often contradictory views, by American and European scholars, of the role of a parliament. Issues are defined in the form of examinations of specific parliamentary bodies, such as the House of Commons, the Bundestag, the French Parliament under the Fifth Republic, and the Indian Parliament.

Writing from the perspective of different national experiences, the contributors display varied perceptions and expectations of the institution, noting those that sustain it even while they make it controversial. Intended primarily as provocative reading for students of comparative government and comparative political institutions; this book illuminates "one of the most enduring and widely applicable inventions of political man, thus making it also a valuable work for scholars as well as practitioners of the political and party process.

The Role of Parliaments in Modern Political Systems -- Gerhard Loewenberg

1: The Decline of Legislatures -- James Bryce
2: Reform of the House of Commons: The Case for Specialization -- John P. Mackintosh
3: Reform of the Bundestag: The Case for General Debate -- Wilhelm Hennis
4: Parliament under the Fifth French Republic: Difficulties of Adapting to a New Role -- Francois Goguel
5: Parliament under the Fifth French Republic: Patterns of Executive Domination -- Philip Williams
6: Parliament and Nation-Building: England and India -- Henry C. Hart
7: Policy Demands and System Support: The Role of the Represented -- John C. Wahlke