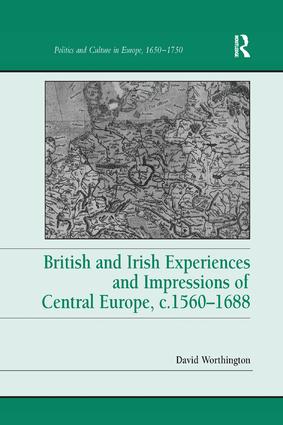 British and Irish Experiences and Impressions of Central Europe, c.1560–1688

Whilst much recent scholarly work has sought to place early modern British and Irish history within a broader continental context, most of this has focused on western or northern Europe. In order to redress the balance, this new study by David Worthington explores the connections linking writers and expatriates from the later Tudor and Stuart kingdoms with the two major dynastic conglomerates east of the Rhine, the Austrian Habsburg lands and Poland-Lithuania. Drawing on a variety of sources, including journals, diaries, letters and travel accounts, the book not only shows the high level of scholarly interest evidenced within contemporary English language works about the region, but how many more British and Irish people ventured there than is generally recognised. As well as the soldiers, merchants and diplomats one might expect, we discover more unexpected and colourful characters, including a polymath Irish moral theologian in Vienna, an orphaned English poetess in Prague, a Welsh humanist in Cracow, and a Scottish physician and botanist at the Vasa court in Warsaw. This examination of the diverse range of Irish, Scottish, Welsh and English religious, intellectual, political, military and commercial contacts with central Europe provides not only a more balanced view of British and Irish history, but also continues the process of reintegrating the histories of the European regions. Furthermore, by extending the focus of research beyond widely studied areas, towards other more illuminating, international aspects, the book challenges scholars to analyse these networks within less parochial, and more transnational settings.

'The book rests on a fresh and challenging methodology. It offers a rich range of individuals and texts, most of which are poorly known. Finally it reminds historians that early modern Europeans held much more in common than traditional historiographies have led us to believe.' - Renaissance Quarterly

'Overall, this body of research and the resulting monograph make an excellent contribution to our understanding of early modern emigration. The author’s thematic approach in combination with his detailed awareness of the politics of the area mean that each chapter does far more than simply analyze emigration patterns but provides a window onto central and eastern Europe.' - H-Albion

'To sum up I must say that David Worthington’s work is a very interesting and a much needed study of the history of Central Europe. In this case it is even more important because of its comparative perspective of the region. Moreover, British and Irish Experiences and Impressions of Central Europe is well written and offers interesting thematic approaches towards the problem, a cleaver structure, and a detailed portrait of the archipelago people in Central Europe.' - Seventeenth-Century News

'The structure of the book, as well as the composition of the chapters, is very clear - elegant, in fact - and it is a pleasure to follow the author's arguments.' - Journal of Scottish Historical Studies

'His work opens up questions not only about connections between the British Isles and Habsburg lands during this period but also about the potential of comparative analysis between the composite British and Habsburg monarchies, with Scotland playing the role of subdued Bohemia and Ireland as troublesome Hungary.' - European History Quarterly

'Worthington’s present work contributes to the knowledge of the engagement of the British and Irish who established networks of contacts across the region… This book makes an important contribution to scholarship on the continuous British and Irish interconnections with continental Europe already under examination notably by Steve Murdoch, Allan Macinnes, Arthur Williamson and Peter Bajer.' -

Dr David Worthington, The Centre for History, University of the Highlands and Islands, Dornoch, Scotland, UK

Focusing on the years between the end of the Thirty Years' War and the end of the War of the Austrian Succession, this series seeks to broaden scholarly knowledge of this crucial period that witnessed the solidification of Europe into centralized nation states and created a recognizably modern political map. Bridging the gap between the early modern period of the Reformation and the eighteenth century of colonial expansion and industrial revolution, these years provide a fascinating era of study in which nationalism, political dogma, economic advantage, scientific development, cultural and artistic interests and strategic concerns began to compete with religion as the driving force of European relations and national foreign policies. The period under investigation, the second half of the seventeenth century and the first half of the eighteenth, corresponds with the decline of Spanish power and the rise of French hegemony that was only to be finally broken following the defeat of Napoleon in 1815. This shifting political power base presented opportunities and dangers for many countries, resulting in numerous alliances between formerly hostile nations attempting to consolidate or increase their international influence, or restrain that of a rival. These contests of power were closely bound up with political, cultural and economic issues: particularly the strains of state building, trade competition, religious tension and toleration, accommodating flows of migrants and refugees, the birth pangs of rival absolutist and representative systems of government, radical structures of credit, and new ways in which wider publics interacted with authority. Despite this being a formative period in the formation of the European landscape, there has been relatively little research on it compared to the earlier Reformation, and the later revolutionary eras. By providing a forum that encourages scholars to engage with the forces that were shaping the continent - either in a particular country, or taking a trans-national or comparative approach - it is hoped a greater understanding of this pivotal era will be forthcoming.