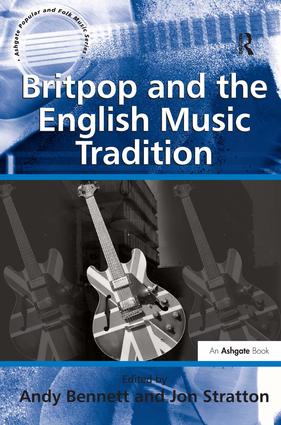 Britpop and the English Music Tradition

Britpop and the English Music Tradition is the first study devoted exclusively to the Britpop phenomenon and its contexts. The genre of Britpop, with its assertion of Englishness, evolved at the same time that devolution was striking deep into the hegemonic claims of English culture to represent Britain. It is usually argued that Britpop, with its strident declarations of Englishness, was a response to the dominance of grunge. The contributors in this volume take a different point of view: that Britpop celebrated Englishness at a time when British culture, with its English hegemonic core, was being challenged and dismantled. It is now timely to look back on Britpop as a cultural phenomenon of the 1990s that can be set into the political context of its time, and into the cultural context of the last fifty years - a time of fundamental revision of what it means to be British and English. The book examines issues such as the historical antecedents of Britpop, the subjectivities governing the performative conventions of Britpop, the cultural context within which Britpop unfolded, and its influence on the post-Britpop music scene in the UK. While Britpop is central to the volume, discussion of this phenomenon is used as an opportunity to examine the particularities of English popular music since the turn of the twentieth century.

'Britpop was the UK's headline musical phenomena during the 1990s - just at the point when devolution suggested that the UK may be breaking down. This edited collection doesn't merely describe the sights, sounds and aesthetics of Britpop, it also explores and explains its political, economic and cultural contexts. The fact that it does this with a critical edge means that it is not only essential reading for popular music students, but also a significant contribution to our understanding of a peculiarly important moment in recent musical history.' Stuart Borthwick, Liverpool John Moores University, UK