Brittany in the Early Middle Ages
Texts and Societies 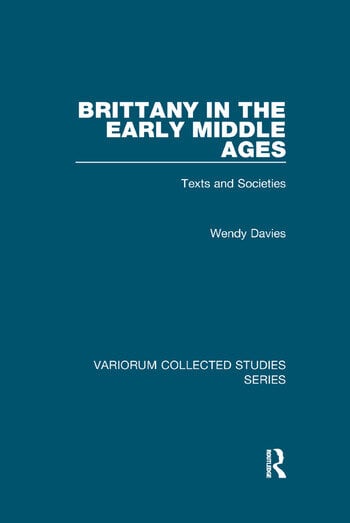 Brittany in the Early Middle Ages: Texts and Societies

This volume focuses on Wendy Davies's work on early medieval Breton texts and their implications. Beginning with core analyses of the Redon and Landévennec cartularies, it continues with papers that tease out some of the key social implications of the 9th-century Redon material - on the nature of political power, on rural communities, on the settlement of disputes, and on transmission of property. While the Redon charters have long been known as a source of fundamental importance for Breton history, the author's database (established in the 1980s) allowed much greater understanding of the role of individuals - at all social levels, and particularly peasant level - than had previously been possible. Attention to the detail of the east Breton past also includes papers on some of the results of her fieldwork, on building stone in particular. Early medieval Brittany is not merely interesting in itself (and it is certainly not some Celtic backwater): Breton evidence can usefully be differentiated from the evidence of other Celtic areas and has a significant role in wider issues of European history. As well as papers on the familiar themes of kingship, rulership, cult sites and cemeteries, the final section highlights the distinctive quality of the Breton evidence for the protection of sacred and personal space, for slavery and serfdom and for village-level courts.

Contents: Introduction; Breton Charters: The composition of the Redon cartulary; Forgery in the Cartulaire du Redon; Les chartes du Cartulaire de Landévennec. East Breton Society: On the distribution of political power in Brittany in the mid-9th century; Priests and rural communities in East Brittany in the 9th century; Disputes, their conduct and their settlement in the village communities of Eastern Brittany in the 9th century; People and places in dispute in 9th-century Brittany; Suretyship in the Cartulaire du Redon; Intra-family transactions in South-eastern Brittany: the dossier from Redon; Wynebwerth et enepuuert: l'entretien des épouses dans la Brétagne du IXe siècle; A note on ville name forms and settlement development in the Morbihan; Field survey and the problem of surface scatters of building material: some East Breton evidence; Surface scatters of building stone: enhancing field survey work. Brittany in the Wider World: Ecclesiastical centres and secular society in the Brittonic world in the 10th and 11th centuries; 'Protected space' in Britain and Ireland in the Middle Ages; Celtic kingships in the early Middle Ages; Alfred's contemporaries: Irish, Welsh, Scots and Breton; On servile status in the early Middle Ages; Local participation and legal ritual in early medieval law courts; Index.