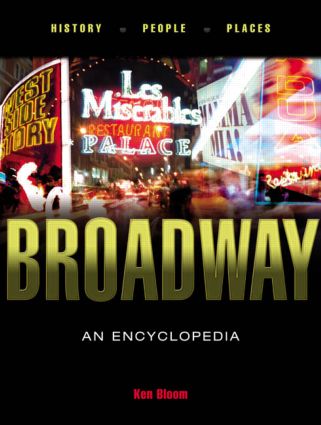 This volume is another example in the Routledge tradition of producing high-quality reference works on theater, music, and the arts. An A to Z encyclopedia of Broadway, this volume includes tons of information, including producers, writer, composers, lyricists, set designers, theaters, performers, and landmarks in its sweep.

'Bloom adds a touch of atmosphere with entries on critics, restaurants, publicity stunts, nightclubs, and other periphery characters and incidents that are so much a part of the Great White Way. As much a storyteller as a chronicler, he uses anecdotes and a plethora of black-and-white photographs, many never before published, to produce and entertaining as well as an informative work. Highly recommended for all theater collections.' – Library Journal

Ken Bloom has been involved in the theater as a writer, director, producer and box office manager. He is the former editor of the "Washington Season," in the Washington Post, and has spoken on the American musical scene for NPR and the Canadian Broadcasting Co. He is a grammy-nominated record producer.