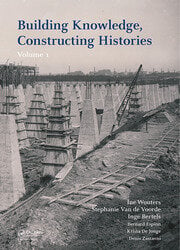 The papers cover various types of buildings and structures, from ancient times to the 21st century, from all over the world. In addition, thematic papers address specific themes and highlight new directions in construction history research, fostering transnational and interdisciplinary collaboration.

Building Knowledge, Constructing Histories is a must-have for academics, scientists, building conservators, architects, historians, engineers, designers, contractors and other professionals involved or interested in the field of construction history.

This is volume 1 of the book set.

Thematic session: Building maintenance in ancient times (up to the early modern period)

Maintaining an atrium house during the principate in Ostia
G. Mainet

Siena 1357. The failure of a great plan
K. Tragbar

The public architect’s role as surveyor of the construcion site in the nineteenth century: The example of Belgian provincial architects
J. Cornilly

Thematic session: Architects and bureaucrats: Centralised governments and the administrative pre-conditions of building before 1750

Architects and bureaucrats: Centralised governments and the administrative pre-conditions of building before 1750
M. Hurx

The impact of bureaucratic procedures on architectural planning in the Late Middle Ages in the Low Countries
M. Hurx

Building for the Crown: Contracts and administration under the Spanish monarchy in the sixteenth and seventeenth centuries, the Monastery of El Escorial
P. Chías & T. Abad

Bureaucratization and dynamization of construction processes in the electorate of Bavaria
A. Gommel

The director, the first architect of the academy and the professor: The roles of these figures in the academic teaching of eighteenth-century France
H. Rousteau-Chambon

Architects and institutions in the construction of the new city of Cervia
I. Benincampi

Stone and concrete: A review of the coevolution of the surface finishes of two buildings materials
H.A. Heinemann & W.J. Quist

Hangars built of concrete reinforced in various ways, 1908–21: Toward a majestic nave without ribbing
B. Lampariello

The diffusion of the Zeiss-Dywidag system in Italy: Two cases in Rome
M. Russo & E. Curra

A great achievement of the Soviet construction technology in Siberia: The reinforced concrete cupola of the Novosibirsk Theatre
I. Nevzgodin

Thematic session: Transnational exchange in the construction worlds of nineteenth and twentieth century Asia: The diffusion of materials and processes in the Global South

Transnational exchange in the construction worlds of nineteenth and twentieth century Asia: The diffusion of materials and processes in the Global South
A. Srivastava & P. Scriver

Learning from the ‘other’: Early modern emulation and trans-imperial exchange of ‘native’ building technologies
P. Guedes

Schematic reconstruction of a type of Roman scaffolding used for the Basilica of Maxentius
L. Albrecht & M. Döring-Williams

Glasgow city chambers: The construction and building services history of a major municipal building from the Victorian period
N.C. Baker

Changes in the battlements and machicolations of the Late Medieval castles between the duchy of Milan and Este dominions. Just a question of style or also function?
L. Balboni

Contracting blunders and innovative regulations of US military construction 1861 to 1918
J.L. Beard

Exploring the visual material within the building process of the Villa Savoye
V. Boone & B. Gandini

General contractors and architects in nineteenth-century America
B. Bowen

From invention to production: The introduction of prestressed concrete
J. Burchardt

Influences of the engineer Pier Luigi Nervi on the work of the architect Marcel Breuer
M.Á. Calvo-Salve

Building contracts in the city of Girona from the fourteenth to the eighteenth century
M.A. Chamorro, J. Soler, R. Ripoll & E. Vilagran

Innovative or derivative? The design of the bridge structures on the world’s first intercity railway between Liverpool and Manchester
M. Chrimes

The graphic statics of the systems of space by Benjamin Mayor
T. Ciblac

TPI – the Italian popular theatre: An architectural, technological and building experiment of a space in motion
A. Como, L. Smeragliuolo Perrotta, S. Talenti & A. Teodosio

Inquiring into the structural identity of the Sala dei Baroni vault
M.T. Como

What hides behind the plaster? Hollow-brick and iron vaults in Europe between the eighteenth and the twentieth century
P. Condoleo

Reinforced concrete in Italy through the works of two generations of engineers: Mario and Giorgio Baroni
E. Curra & M. Russo

A business-historical analysis of Entreprises générales Henri Ruttiens (1878–2000)
J. Dobbels, I. Bertels, I. Wouters & B. Espion

Constructive culture in the transition from the nineteenth to the twentieth century. Contributions of Alfredo de Andrade (1839–1915) to construction history across Italy and Portugal
T.C. Ferreira

From pickaxes to steam saws: The construction of the row house in Dublin (1730–1888)
S. Galavan

From master builder to subcontractor: The Guastavino Company and the role of specifications
J. Garcia Fritz

Geometry on paper and on the ground in the last third of the seventeenth century. Leclerc’s and Manesson-Mallet’s contribution and influence
J. Girón

Innovation of construction systems versus reproducibility of the architectural image. Multiple constructional processes in the ‘Unité d’Habitation’ (1945–67)
F. Graf

Ine Wouters (°1972) holds a MSc degree in Architectural Engineering (Vrije Universiteit Brussel (VUB) 1996) and a PhD in Engineering (VUB 2002). After a short stay at PHL, she built up her research career in the Faculty of Engineering at VUB. She is head of the Department of Architectural Engineering since 2011. Her research focuses on historic building materials, innovative construction techniques and the various actors involved to better understand, value and interact with the nineteenth and twentieth century architectural and industrial heritage. She is co-founder of the research centre Construction HistorieS Brussels (CHsB) and a member of the English Construction History Society (CHS), the International Committee for the Conservation of the Industrial Heritage (TICCIH), the International Council on Monuments and Sites (ICOMOS Vlaanderen-Brussel), the Gesellschaft für Bautechnikgeschichte and the Flemish Association for Industrial Archaeology (VVIA). In 2011-13 she co-organised the first three European Summer Schools on Construction History in Cambridge, Brussels and Munich.

Stephanie Van de Voorde (°1981) is specialized in 20th-century architectural and construction history in Belgium, focusing on building materials and building actors. After her MSc degree in architectural engineering (Ghent University 2005), she wrote a PhD on Building in Concrete in Belgium (1890-1975). Interplay of Knowledge, Experiment and Innovation (Ghent University, 2011). Since then, Stephanie conducted several research projects, for instance on the history of architectural education in Belgium and post-war construction materials and building techniques (www.postwarbuildingmaterials.be). From 2013 onwards, Stephanie works at the Department of Architectural Engineering of the Vrije Universiteit Brussel as a professor and post-doctoral researcher. Stephanie is an Expert Member of ICOMOS International Scientific Committee 20th Century (ISC20C) and member of the research team Construction HistorieS Brussels (CHsB), the editorial board of the bimonthly journal M&L. Monumenten, Landschappen en Archeologie, of the Construction History Society, Docomomo, and the Association Francophone de l'Histoire de la Construction.

Inge Bertels (°1976) is a historian (KU Leuven, 1998) and master in Conservation (R. Lemaire Centre for Conservation KU Leuven, 2000). Simultaneous with her studies in conservation she worked as an architectural historian at the Antwerp Architect’s offices R. Steenmeijer & H. Baksteen (1999-2000). From October 2000 to October 2006 she was related to the R. Lemaire Centre and the research group Architectural History of the Department of Architecture, Urbanism and Planning of the KU Leuven. Later on she worked as a postdoctoral fellow of the Fonds Wetenschappelijk Onderzoek at the Centre of Urban History at the Department of History of the Universiteit Antwerpen. In 2008 she gradually started teaching architectural history and theory at the Vrije Universiteit Brussel and today combines a professorship at the Vrije Universiteit Brussel and Universiteit Antwerpen.

Bernard Espion (°1956) is Professor of Structural Engineering at the Université Libre de Bruxelles (ULB) where he is also the Director of the Civil Engineering Laboratory. He is a founding member of "Construction HistorieS Brussels" ULB-VUB joint research group. His main research interests in Construction History lie in structures (reinforced and prestressed concrete, composite steel-concrete, cable roofs, thin concrete shells, bridges, ...), materials and construction processes (cement and concretes, iron and steel, connections, …), historical evolution of structural theories and design concepts, especially by Belgian engineers, contractors and companies, 19-20th Centuries. He contributes to the promotion of Belgian civil and building engineering heritage by publications, lectures and contributions to exhibitions. He has been member from 2013 to 2017 of the editorial board of the international journal "Engineering History and Heritage" and of the working group "Construction History" of the International Association for Bridge and Structural Engineering.

Krista De Jonge (°1959) is specialized in late mediaeval and early modern architectural history in the Low Countries. She trained in architectural engineering at KU Leuven and in early modern history and history of architecture at the Centre d’Études supérieures de la Renaissance in Tours, France. Since 2001 she is full professor of history of architecture at KU Leuven and currently chairs its research Department of Architecture. She is also an elected member of the Academia Europaea, the Royal Flemish Academy for Science and the Arts, the Royal Academy of Archaeology of Belgium, and the National Committee for the History of Science and Logic of Belgium; moreover, she is or was an advisor to the Academia Belgica in Rome, to FWO Vlaanderen and to the Fondation de la Recherche Scientifique, Belgium, to the Royal Institute of Heritage, Brussels, and to the Centre d’Études supérieures de la Renaissance in Tours, France. She was a fellow of the Centre André Chastel, INHA, Paris, and a member of the Royal Commission of Monuments and Sites in the Brussels Capital Region. Her research interests within the field of construction history include gothic vaulting techniques, dome construction, masonry and foundations, as well as the organisation of the building site and the development of the building professions in the early modern period.

Denis Zastavni (°1973) is Dr. Arch. Eng. and Professor at the Faculty of Architecture, Architectural Engineering and Urbanism [LOCI] of the Université catholique de Louvain at Louvain-la-Neuve in Belgium. He has worked as a structural engineer and architect for over ten years. His PhD was on Robert Maillart’s design methods and he won the Premio Edoardo Benvenuto in 1998. His main publications are on structural design, pedagogical approaches in teaching structure and technology, and Robert Maillart’s designs. His current research is focused on structural design approaches and tools, analysis of historical structures, history of the design of structures and construction, graphic statics, timber constructions and on deepening his knowledge of Robert Maillart’s structural methods.