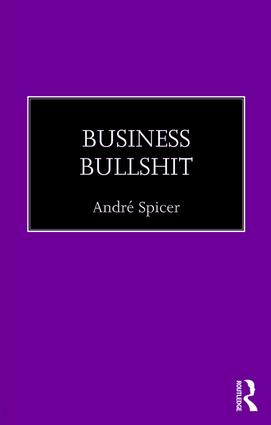 Our organizations are flooded with empty talk. We are constantly "going forward" to lands of "deliverables", stopping off on the "journey" to "drill down" into "best practice". Being an expert at using management speak has become more important in corporate life than delivering long lasting results. The upshot is that meaningless corporate jargon is killing our organizations.

In this book, management scholar the author argues we need to call this empty talk what it is: bullshit. The book looks at how organizations have become vast machines for manufacturing, distributing and consuming bullshit. It follows how the meaningless language of management has spread through schools, NGOs, politics and the media.

Business Bullshit shows you how to spot business bullshit, considers why it is so popular, and outlines the impact it has on organizations and the people who work there. It also outlines what we can do to minimise bullshit at work. The author makes a case for why organizations need to avoid empty talk and reconnect with core activities.

'Andre Spicer … makes salient points. The more claptrap managers spout to each other, the less clearly they think.' - Luke Johnson, The Times

'Unclear speaking is a sign of unclear thinking, and Andre Spicer is here to do something about it. He delivers a searing indictment of business jargon and some steps toward making us all a little smarter.' - Adam Grant, New York Times bestselling author of GIVE AND TAKE, ORIGINALS, and OPTION B with Sheryl Sandberg

'What makes Andre Spicer's work so irresistible is that in the midst of his irascible wit he gets to the heart of the nonsense that affects our work communication far more than we'd like to admit.' - Bruce Daisley, Vice President Europe, Twitter

'There is a good deal of bullshit in the academy, but fortunately academics are at the forefront of calling it out. Andre Spicer has taken up the baton.' - Times Higher Education

'We live in an age of rising panic surrounding the status of truth in our politics and society. In this brilliant polemic, Andre Spicer demonstrates that our economy has long tolerated empty sloganeering and meaningless jargon, making a small minority of gurus and consultants very rich, but leaving the vast majority of us with a sense of deep pointlessness.' - William Davies, Goldsmiths, University of London, UK

'We hear business bullshit all day. But few know how it started, where it comes from or what to do about it. Andre Spicer is funny and clever on the topic and we badly need his practical wisdom to win through.' - Margaret Heffernan, Businesswoman and author of "Wilful Blindness"

'Anybody familiar with corporate life will find this book extremely amusing—until realizing that it is dead serious. The battle against bullshit is one worth fighting, even if you lose it. Read Spicer’s book, and engage.' - Martin Gargiulo, INSEAD, Spain

'Thorough and entertaining: Spicer's mirror for managers. In an insightful and entertaining way, he enables managers to cut the costly bullshit from their firms and create a competitive advantage.' - Freek Vermeulen, London Business School, UK

'The key idea of Spicer's book is that 'business bullshit' can take over organisations, crowding out their core purpose and muddy the waters of language' (p.xii). In other words, when pro-business management academics, management writers, CEOs, and other upper-level managers invent bullshit language, they fabricate something that gets in the way of businesses…Andre Spicer's book is not against business; rather it is the very opposite. In it, he argues that removal of bullshit language can make businesses return to their core purpose, namely making money - for some a lot and for others not so much.' - Thomas Klikauer is a teacher in the Sydney Graduate School of Management, Western Sydney University, Australia

1. Introduction 2. Bullshit: A Spotters Guide 3. Why is There So Much Bullshit? 4. How to Do Things with Bullshit 5. Cutting the Bullshit

André Spicer is a Professor of Organizational Behaviour at Cass Business School, City University of London. He has spent two decades studying the impact of management speak on organizations and the people who work there. He has advised a wide range of organisations, and frequently appears in the global media to discuss business issues. Professor Spicer has published several books including Contesting the Corporation, Metaphors we Lead by, The Wellness Syndrome and The Stupidity Paradox.

The proliferation of management jargon knows few bounds, and Andre Spicer's book includes examples from the worlds of business, media, education, healthcare, government and sports. As a result, media interest in the book has been considerable – this is summarized here.

A social media campaign to stop #BusinessBullshit from killing our organizations can be followed on Twitter.

Journalists and potential reviews of the book should get in touch with our Senior Publisher, Terry Clague to request a review copy.