Business, Marketing, and Management Principles for IT and Engineering 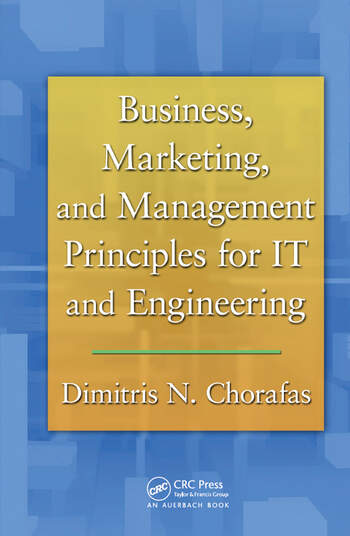 Business, Marketing, and Management Principles for IT and Engineering

In order to achieve long-term profitability and assure survival for their companies, managers must be informed, imaginative, and capable of adapting to shifting circumstances. Practical decisions rather than theories hold the upper ground. Business, Marketing, and Management Principles for IT and Engineering supplies the understanding required to effectively manage an organization in an increasingly competitive global market.

Using case studies, the book illustrates the principles, policies, and management practices used by some of the most successful companies around the world. The real-world case studies supply valuable insight into the range of issues that confront decision makers in business. By explaining how to develop effective strategies and business plans, the text supplies both the concepts and the tools to stay on track with those plans. It also:

Dimitris N. Chorafas provides valuable insight garnered over half a century of advising financial institutions and multinational industrial corporations. Dr. Chorafas explains how to develop competitive products and use pricing strategies to achieve an edge over your competition. He also includes case studies that examine the price wars in the computer industry.

This book supplies a realistic look into the positive and negative aspects of various policies and whether or not current practices related to forecasting, planning, organizing, staffing, directing, and controlling have produced th

More than 8,000 banking, industrial and government executives have participated in his seminars in the United States, England, Germany, Italy, Asia, and Latin America.

Dr Chorafas is the author of 153 books, some of which have been translated into 16 languages.