Byzantine Chronicles and the Sixth Century 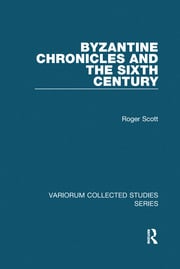 Byzantine Chronicles and the Sixth Century

Byzantine chronicles have traditionally been regarded as a somewhat inferior form of Byzantine history writing, especially in comparison with 'classicizing' historians. The aim of many of these papers is both to rescue the reputation of the Byzantine chroniclers, especially Malalas and Theophanes, and also to provide some examples of how these two chroniclers in particular can be exploited usefully both to reveal aspects of the past itself, notably of the period of Justinian, and also of how the Byzantines interpreted their own past, which included on occasions rewriting that past to suit altered contemporary needs. For the period of Justinian in particular, proper attention to aspects of the humble Byzantine chronicle can also help achieve a better understanding of the period than that provided by the classicizing Procopius with his emphasis on war and conquest. By considering more general aspects of the place of history-writing in Byzantine culture, the papers also help explain why history remained such an important aspect of Byzantine culture.

Contents: Preface; Part A Historiography, Chronicles and the 6th Century: Byzantine chronicles; Byzantium in the 6th century and the beginning of Byzantine historical writing; The classical tradition in Byzantine historiography; Text and context in Byzantine historiography; Towards a new history of Byzantine literature: the case of historiography (with Ingela Nilsson); Chronicles versus classicizing history: Justinian's West and East. Part B Malalas, Theophanes and the 6th Century: Malalas and his contemporaries; Malalas and Justinian's codification; Malalas, The Secret History and Justinian's propaganda; John Lydus on some procedural changes; Diplomacy in the 6th century: the evidence of John Malalas; 'The events of every year arranged without confusion': Justinian and others in the chronicle of Theophanes Confessor; Writing the reign of Justinian: Malalas versus Theophanes. Part C Malalas, Theophanes and Their Byzantine Past: Malalas' view of the classical past; The image of Constantine in Malalas and Theophanes; From propaganda to history to literature: the Byzantine stories of Theodosius' apple and Marcian's eagles. Part D Reinterpreting the 5th and 6th Centuries: Narrating Justinian: from Malalas to Manasses; Interpreting the late 5th and early 6th centuries from Byzantine chronicle trivia; Justinian's new age and the Second Coming; Index.

Roger Scott is a Principal Fellow in the Department of Classics and Archaeology, University of Melbourne, Australia.

'By attempting to draw our intention to the nuances and complexity of seemingly straightforward, plagiarism-filled chronicles in this book and throughout his career, Scott has done the study of late antique historiography a great service.' Bryn Mawr Classical Review