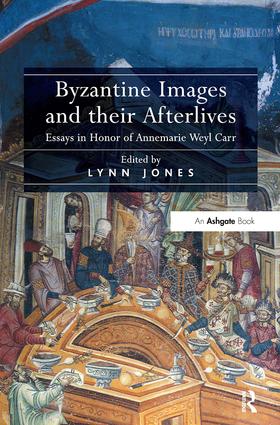 Byzantine Images and their Afterlives

The twelve papers written for this volume reflect the wide scope of Annemarie Weyl Carr's interests and the equally wide impact of her work. The concepts linking the essays include the examination of form and meaning, the relationship between original and copy, and reception and cultural identity in medieval art and architecture. Carr’s work focuses on the object but considers the audience, looks at the copy for retention or rejection of the original form and meaning, and always seeks to understand the relationship between intent and perception. She examines the elusive nature of ’center’ and ’periphery’, expanding and enriching the discourse of manuscript production, icons and their copies, and the dissemination of style and meaning. Her body of work is impressive in its chronological scope and geographical extent, as is her ability to tie together aspects of patronage, production and influence across the medieval Mediterranean. The volume opens with an overview of Carr’s career at Southern Methodist University, by Bonnie Wheeler. Kathleen Maxwell, Justine Andrews and Pamela Patton contribute chapters in which they examine workshops, subgroups and influences in manuscript production and reception. Diliana Angelova, Lynn Jones and Ida Sinkevic offer explorations of intent and reception, focusing on imperial patronage, relics and reliquaries. Cypriot studies are represented by Michele Bacci and Maria Vassilaki, who examine aspects of form and style in architecture and icons. The final chapters, by Jaroslav Folda, Anthony Cutler, Rossitza Schroeder and Ann Driscoll, are linked by their focus on the nature of copies, and tease out the ways in which meaning is retained or altered, and the role that is played by intent and reception.

'Students and scholars with an interest in pan-Mediterranean and cross-cultural art historical issues will find this book to be interesting and informative. With its contributions to areas of research so profoundly enriched by Carr’s work throughout her long career, this festschrift serves as fitting tribute to a deeply admired scholar.' Hortulus 'Byzantine Images and their Afterlives is an impressive tribute to Annemarie Wey Carr's scholarship, mentorship, and friendship. This handsome volume, together with many of Carr's publications, will find a welcome spot on this reviewer's bookshelf.' Medieval Review

Contents: Preface; Introduction: the collegial life of Annemarie Weyl Carr, Bonnie Wheeler. Part I Manuscripts: Workshops, Subgroups and Influences: The afterlife of texts: decorative style manuscripts and New Testament textual criticism, Kathleen Maxwell; Flexibility and fusion in Eastern Mediterranean manuscript production: Oxford, Bodleian, Laud. Gr. 86, Justine M. Andrews; The little Jewish boy: afterlife of a Byzantine legend in 13th-century Spain, Pamela A. Patton. Part II Intent and Reception: The stamp of power: the life and afterlife of Pulcheria’s Buildings, Diliana Angelova; Perceptions of Byzantium: Radegund of Poitiers and relics of the True Cross, Lynn Jones; Afterlife of the Rhodes Hand of St John the Baptist, Ida Sinkevi. Part III Cypriot Influences: Some remarks on the appropriation, use, and survival of Gothic forms on Cyprus, Michele Bacci; Byzantine icon-painting around 1400: Constantinople or Crete?, Maria Vassilaki. Part IV The Nature of Copies: The use of Ã§intamani as ornament: a case study in the afterlife of forms, Jaroslav Folda; Twice is not enough: the biography of a ’Byzantine’ Crucifixion ivory, Anthony Cutler; The salvation of the soul and the road to Heaven: the representation of the Ladder of Divine Ascent in the Vatopedi Katholikon, Rossitza B. Schroeder; Death and life: the persistence of sacred imagery from the Croce Dipinta of Albert Sotio, Ann Driscoll. Publications of Annemarie Weyl Carr; Index.

Lynn Jones is Associate Professor in the Department of Art History, Florida State University, Talahassee, USA, She is the author of Between Islam and Byzantium (2007).