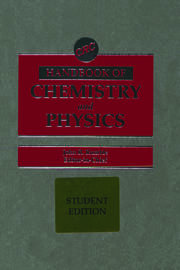 Properties of the Elements and Inorganic Compounds

Dr. John Rumble has long been a leader in developing and providing access to databases in numerous S&T disciplines. From 1980 through 2004, he worked in the NIST Standard Reference Data Program and later was responsible for NIST measurement services programs. From 2004 to 2011, He was Executive Vice President of Information International Associates in Oak Ridge, Tennessee. Today he is President of R&R Data Services in Gaithersburg MD.

Rumble has served on numerous national and international STI policy committees and review panels and was a member of the Board on International Scientific Organizations of the National Academy of Sciences.

Dr. Rumble was among the first to build online, PC, and Internet/web-based factual databases for scientific and technical (S&T) data. While at NIST, he sponsored data projects with scientists in China, Japan, England, France, Germany, and Russia. During that time, he also worked with many industry organizations and professional societies to develop industry-related data programs in materials science and chemistry, as well as standards for S&T data exchange.

Dr. Rumble has considerable experience in chemistry, physics, materials science, nanomaterials, and informatics and data science experience and has published widely in all these areas. Rumble received a Ph.D. in Chemical Physics from Indiana University.

In 1998-2002, Rumble served as President of CODATA, the ICSU Committee on Data for Science and Technology. Dr. Rumble is Fellow of IUPAC, AAAS, APS, ASTM International, ASM International, and IAFoST, as well as a Foreign Member of the Russian Academy of Metrology. He was awarded the CODATA 2006 Prize for outstanding achievements in S&T data. He has served two terms as Editor-in-Chief of the CODATA Data Science Journal.

During the last five years, Dr. Rumble has led a multi-disciplinary effort to develop a uniform system for describing nanomaterials. This work has been done under the auspices of CODATA International and the International Council for Science. Rumble has put together a unique group of international union representatives from the diverse scientific and technical fields interested in nanotechnology, including chemistry, physics, materials science, food science and technology, nutrition science, toxicology, and more. In addition, he has reached out to more general audiences in these fields through international workshops, symposia at union conferences, and liaisons with U.S. and European Nanosafety projects. This work is available at www.codata.org/nanomaterials