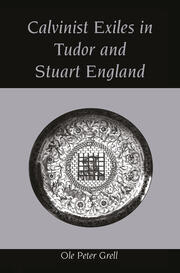 This volume is a synthesis of the research articles of one of Europe’s leading scholars of 16th-century exile communities. It will be invaluable to the growing number of historians interested in the religious, intellectual, social and economic impact of stranger communities on the rapidly changing nation that was Elizabethan and early Stuart England. Southern England in general, and London in particular, played a unique part in offering refuge to Calvinist exiles for more than a century. For the English government, the attraction of exiles was not so much their Reformed religion and discipline as their economic potential - the exiles were in the main skilled craftsmen and well-connected merchants who could benefit the English economy.

Contents: Introduction; A new home or a temporary abode? Dutch and Walloon exiles in England; French and Dutch congregations in the early 17th century; A friendship turned sour: Puritans and Dutch Calvinists in East Anglia; From uniformity to tolerance: the effects on the Dutch church in London of reverse patterns in English church policy, 1634-1647; Merchants and ministers: the foundations of international Calvinism; From persecution to integration: the decline of the Anglo-Dutch communities in England, 1648-1702; The schooling of the Dutch Calvinist community in London, 1550-1650; Tribute and triumph: Dutch pageants and Stuart coronations; Calvinist Agape or Godly dining club?; Plague in Elizabethan and Stuart London: the Dutch response; The attraction of Leiden University for English students of medicine and theology, 1590-1652; Index.

'this volume can be welcomed as a considerable addition to the growing literature in an important field.' The Economic History Review 'Grell makes excellent use of archival and published materials to produce a significant addition to the growing body of literature on the development of international Calvinism.' Calvin Theological Journal, Vol. 33, No. 1 ’...a fine collection of scholarly research and reflection on the Dutch and Walloon churches in Tudor-Stuart England.’ Sixteenth Century Journal, Vol. XXIX, No. 1