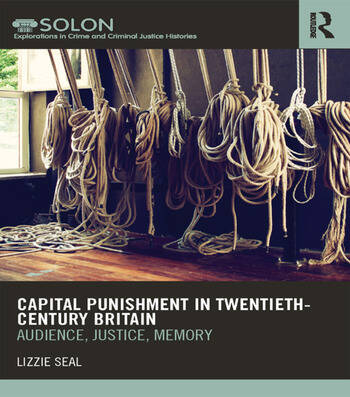 Capital punishment for murder was abolished in Britain in 1965. At this time, the way people in Britain perceived and understood the death penalty had changed – it was an issue that had become increasingly controversial, high-profile and fraught with emotion. In order to understand why this was, it is necessary to examine how ordinary people learned about and experienced capital punishment.

Drawing on primary research, this book explores the cultural life of the death penalty in Britain in the twentieth century, including an exploration of the role of the popular press and a discussion of portrayals of the death penalty in plays, novels and films. Popular protest against capital punishment and public responses to and understandings of capital cases are also discussed, particularly in relation to conceptualisations of justice. Miscarriages of justice were significant to capital punishment’s increasingly fraught nature in the mid twentieth-century and the book analyses the unsettling power of two such high profile miscarriages of justice. The final chapters consider the continuing relevance of capital punishment in Britain after abolition, including its symbolism and how people negotiate memories of the death penalty.

is groundbreaking in its attention to the death penalty and the effect it had on everyday life and it is the only text on this era to place public and popular discourses about, and reactions to, capital punishment at the centre of the analysis. Interdisciplinary in focus and methodology, it will appeal to historians, criminologists, sociologists and socio-legal scholars.

Lizzie Seal is Senior Lecturer in Criminology at the University of Sussex. Her research interests include gender representations of women who kill, cultural criminology, historical criminology and capital punishment. Her previous publications include Women, Murder and Femininity: Gender Representations of Women Who Kill (Palgrave, 2010) and, with Maggie O’Neill, Transgressive Imaginations: Crime, Deviance and Culture (Palgrave, 2012).

'A crucially important historicity of the cultural narrative and framing of the death penalty in Britain from the nineteenth century to abolition. Lizzie Seal’s study is a fascinating enquiry into media reporting and popular reception of the circumstances surrounding murders and the imposition of executions. This book is a cogent reminder of the real potential of miscarriages of justice in capital cases, and will help to keep political attention on human rights rather than retribution through an archaic punishment.' - Jon Yorke, Reader in Law and Director, Centre for American Legal Studies, Birmingham City University, UK

‘Lizzie Seal’s Capital Punishment in Twentieth-Century Britain offers a fresh look at the press and public imagination of the state’s ultimate penalty in a period when its reality was hidden behind prison walls. Combining extensive primary research with a broad engagement with secondary literature, Seal generates new perspectives on well-known cases and sheds light on the experiences of many of the now-forgotten British condemned. Her book is a pioneering and intellectually exciting contribution to the rapidly developing historiography of crime and criminal justice in twentieth-century Britain.’ - John Carter Wood, Leibniz Institute of European History, Germany

‘With multiple points of insight, Seal offers a meaning-centered analysis of the demise of capital punishment in Britain. By contrast with accounts of this as an elite-driven activity that defied entrenched public beliefs, Seal shows widespread unease and ambivalence in popular attitudes and circulating media representations. The upshot is a thickened understanding of a surprisingly complex field.’ - Philip Smith, Professor of Sociology, Yale University, USA

‘This important book is a valuable addition to the literature on capital punishment in twentieth-century Britain. By examining the cultural history of capital cases and endeavouring to ascertain opinions of the general public (albeit often refracted through a range of popular representations), Lizzie Seal has opened up exciting new perspectives on the popular politics of the death penalty.’ - Dr Anne Logan, University of Kent, UK

‘This is a groundbreaking book - it sets out and delivers a project which renews the study of the death penalty in Britain […] Its exploration of the everyday meanings and cultural life of capital punishment in twentieth-century Britain is a timely and accomplished contribution to a literature often preoccupied with capital punishment in the US and with elite political projects and cultures of abolition.

Dr Seal's research expands the rich historiography of the cultural meanings of capital punishment in Britain in the eighteenth and nineteenth century to include the twentieth century as a seminal period in capital punishment transformation. It is a must-read for everyone interested in the death penalty and penal politics (both in Britain and elsewhere) and more broadly in the sociology of punishment.’ - Dr Evi Girling, Senior Lecturer in Criminology, Keele University, UK

In this interesting, clearly written book, Seal (criminology, Univ. of Sussex, UK) looks at capital punishment in the UK not simply as the march toward abolition (made official in 1969) but rather as a broad social study. Seal has presented a thoughtful, original, well-documented study. Summing Up: Highly recommended -P. T. Smith, Saint Joseph's University, CHOICE Review, November 2014

This book is a work of painstaking and detailed scholarship which adds tremendously to our knowledge about the wider context of the debate about capital punishment in Britain. It will be of interest not only to criminologists and historians of criminal justice but to all concerned with the nature and dynamics of public opinion. - John Lea, University of Leicester, British Journal of Criminology