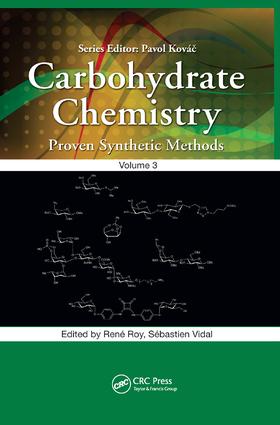 Volumes in the Proven Synthetic Methods Series address the concerns many chemists have regarding irreproducibility of synthetic protocols, lack of characterization data for new compounds, and inflated yields reported in chemical communications—trends that have recently become a serious problem.

Featuring contributions from world-renowned experts and overseen by a highly respected series editor, Carbohydrate Chemistry: Proven Synthetic Methods, Volume 3 compiles reliable protocols for the preparation of intermediates for carbohydrate synthesis or other uses in the glycosciences.

Exploring carbohydrate chemistry from both the academic and industrial points of view, this unique resource brings together useful information into one convenient reference. To ensure reproducibility, an independent checker has verified the experimental parts involved by repeating the protocols or using the methods.

Rene Roy was born in Québec, Canada. He holds a Canadian Research Chair in therapeutic chemistry in the Department of Chemistry at the Université du Québec à Montréal, Québec, Canada since 2004. He has more than 40 years of experience in carbohydrate chemistry. He earned his PhD in carbohydrate chemistry in 1980 from the Université de Montréal, under the expert guidance of Professor Stephen Hanessian. He joined the National Research Council of Canada in Ottawa (Canada), where he was active from 1980 till 1985, and acquainted himself with carbohydrate-based vaccines. He then served as a professor at the Department of Chemistry, University of Ottawa, during 1985–2002. He was the recipient of the 2003 Melville L. Wolfrom Award from the ACS Division of Carbohydrate Chemistry for his contributions in the design of vaccines and glycodendrimers. He has more than 310 publications and has contributed to the development of two commercial carbohydrate-based vaccines against meningitis. His current interests are in multivalent carbohydrate protein interactions, medicinal chemistry, and nanomaterials.

Sebastien Vidal is a Centre National de la Recherche Scientifique (CNRS) researcher at the University of Lyon, Lyon, France. He earned his PhD in organic chemistry (2000) at the University of Montpellier, France, under the guidance of Professor Jean-Louis Montero, where he synthesized mannose-6-phosphate analogues for drug delivery applications. He then joined the group of Sir J. Fraser Stoddart at the University of California, Los Angeles (UCLA) as a postdoctoral fellow. During the following two and a half years, he studied the synthesis and characterization of glycodendrimers but also the design of pseudorotaxanes. In 2003, he moved to the National Renewable Energy Laboratory (NREL, Golden, Colorado) and studied with Prof. Joseph J. Bozell the combination of organometallic and carbohydrate chemistries for the design of new reactions involving these two aspects of modern organic synthesis. After one year, he joined the group of Prof. Peter G. Goekjian at the University of Lyon in 2004. After successfully applying for a CNRS position the same year, Dr. Vidal started his own research projects dealing with carbohydrate chemistry and applications in biology.

Pavol Kováč, PhD, Dr. h.c., with more than 40 years of experience in carbohydrate chemistry and more than 300 papers published in refereed scientific journals, is a strong promoter of good laboratory practices and a vocal critic of publication of experimental chemistry lacking data that allow reproducibility. He earned an MSc in chemistry at Slovak Technical University in Bratislava (Slovakia) and a PhD in organic chemistry at the Institute of Chemistry, Slovak Academy of Sciences, Bratislava. After postdoctoral training at the Department of Biochemistry, Purdue University, Lafayette, Indiana (R. L. Whistler, advisor), he returned to the Institute of Chemistry and formed a group of synthetic carbohydrate chemists, which had been active mainly in oligosaccharide chemistry. After relocating to the United States in 1981, he first worked at Bachem, Inc., Torrance, California, where he established a laboratory for the production of oligonucleotides for automated synthesis of DNA. He joined the National Institutes of Health in 1983, where he is currently one of the principal investigators and chief of the Section on Carbohydrates (NIDDK, Laboratory of Bioorganic Chemistry), which was originally established by the greatest American carbohydrate chemist Claude S. Hudson and which is arguably the world’s oldest research group continuously working on the chemistry, biochemistry, and immunology of carbohydrates. Dr. Kováč’s primary interest is in the development of conjugate vaccines for infectious diseases from synthetic and bacterial carbohydrate antigens.