Cardinal Pole in European Context
A via media in the Reformation 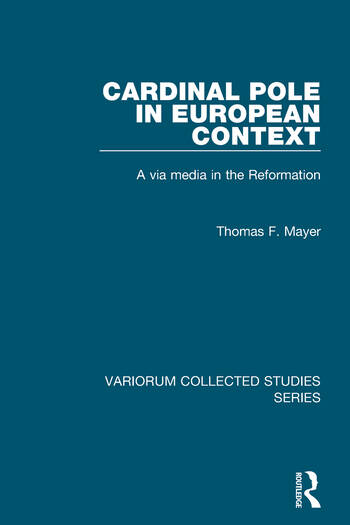 Cardinal Pole in European Context: A via media in the Reformation

Cardinal Reginald Pole (1500-1558) was one of the most important international figures of mid-16th century Europe: principal antagonist of Henry VIII, papal diplomat, legate to the council of Trent, and nearly successful candidate for pope. But even more significant than his political actions is that Pole tried to mediate between increasingly rigid religious positions, preserving belief in justification by faith within a charismatically conceived papal church. His writing converted categories of feudal discourse, especially the language of honour, into newer humanist modes as a means of resisting tyranny, whether secular or religious. He also created his own saintly image, as well as much of the historiography of the English Reformation. These studies place him in his English, Italian and European contexts - political, intellectual and religious. They also evaluate his ties to such major intellectual and literary figues as Marco Mantova Benavides and Ludovico Ariosto.

Contents: Preface; Toleration and resistance: 'Heretics be not in all things heretics': Cardinal Pole, his circle, and the potential for toleration; Nursery of resistance: Reginald Pole and his friends; Tournai and tyranny: imperial kingship and critical humanism; The conclave of Julius III and the role of diplomacy: The war of the two saints: the conclave of Julius III and Cardinal Pole; An unknown diary of Julius III's conclave by Bartolomeo Stella, a servant of Cardinal Pole; If martyrs are exchanged for martyrs: the kidnappings of William Tyndale and Reginald Pole; A diet for Henry VIII: the failure of Reginald Pole's 1537 legation; The Italian religious context: Marco Mantova, a Bronze Age conciliarist; Marco Mantova and the Paduan religious crisis of the early sixteenth century; Ariosto anticlerical: epic poetry and the clergy in early cinquecento Italy; Renaissance collective identity and the creation of an icon: A fate worse than death: Reginald Pole and the Parisian theologians; A sticking-plaster saint? Autobiography and hagiography in the making of Reginald Pole; Reginald Pole in Paolo Giovio's Descriptio: a strategy for reconversion; When Maecenas was broke: Cardinal Pole's 'spiritual' patronage; Cardinal Pole's finances: the property of a reformer; Index.