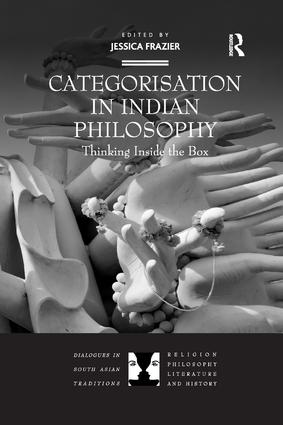 Thinking Inside the Box, 1st Edition

It is by fitting the world into neatly defined boxes that Buddhist, Hindu, and Jain philosophers were able to gain unparalleled insights into the nature of reality, God, language and thought itself. Such categories aimed to encompass the universe, the mind and the divine within an all-encompassing system, from linguistics to epistemology, logic and metaphysics, theology and the nature of reality. Shedding light on the way in which Indian philosophical traditions crafted an elaborate picture of the world, this book brings Indian thinkers into dialogue with modern philosophy and global concerns. For those interested in philosophical traditions in general, this book will establish a foundation for further comparative perspectives on philosophy. For those concerned with the understanding of Indic culture, it will provide a platform for the continued renaissance of research into India's rich philosophical traditions.

’This is a learned and insightful collection of papers, focussed on a theme - categorisation - that has become widely recognized as both culturally informative and philosophically important. Given the range and sophistication of categorisation in the classical Indian tradition, this volume is timely and illuminating. The essays do a fine job of introducing, exploring, and interpreting a myriad of texts and practices of categorisation, and will be of interest not only to specialists and students of Indian philosophy but to those interested more generally in the comparative study of philosophical traditions.’ Chakravarthi Ram-Prasad, Lancaster University, UK 'This wonderful book about classification in Indian philosophy goes to the heart of questions about how we understand the world and the nature of rationality itself. The book is truly interdisciplinary with contributions from philosophers and philologists; it breaks new ground in understanding the concerns of Indian philosophy and their contemporary relevance.' Gavin Flood, Oxford University, UK

Jessica Frazier is a Fellow at the Oxford Centre for Hindu Studies, and Lecturer in Religious Studies at the University of Kent. She is the author of Reality, Religion and Passion: Indian and Western Approaches in Gadamer and Gosvami and author/editor of The Continuum Companion to Hindu Studies, as well as the founding and managing editor of The Journal of Hindu Studies.

Face-to-face conversation and dialogue are defining features of South Asian traditional texts, rituals and practices. Not only has the region of South Asia always consisted of a multiplicity of peoples and cultures in communication with each other, but also performed and written dialogues have been indelible features within the religions of South Asia; Hinduism, Buddhism, Jainism, Sikhism and Islam are all multi-vocal religions. Their doctrines, practices and institutions have never had only one voice of authority, and dialogue has been a shared tactic for negotiating contesting interpretations within each tradition.

This series examines the use of the dialogical genre in South Asian religious and cultural traditions. Historical inquiries into the plurality of religious identity in South Asia, particularly when constructed by the dialogical genre, are crucial in an age when, as Amartya Sen has recently observed, singular identities seem to hold more destructive sway than multiple ones. This series approaches dialogue in its widest sense, including discussion, debate, argument, conversation, communication, confrontation and negotiation. Opening up a dynamic historical and literary mode of analysis, which assumes the plural dimensions of religious identities and communities from the start, this series challenges many outdated assumptions and representations of South Asian religions.