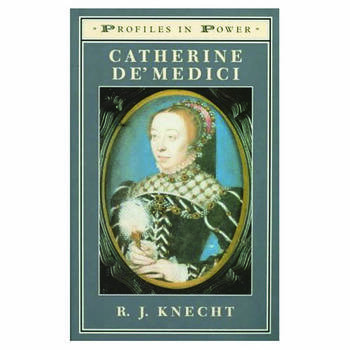 Catherine de' Medici (1519-89) was the wife of one king of France and the mother of three more - the last, sorry representatives of the Valois, who had ruled France since 1328. She herself is of preeminent importance to French history, and one of the most controversial of all historical figures. Despised until she was powerful enough to be hated, she was, in her own lifetime and since, the subject of a "Black Legend" that has made her a favourite subject of historical novelists (most notably Alexandre Dumas, whose Reine Margot has recently had new currency on film). Yet there is no recent biography of her in English. This new study, by a leading scholar of Renaissance France, is a major event.

Catherine, a neglected and insignificant member of the Florentine Medici, entered French history in 1533 when she married the son of Francis I for short-lived political reasons: her uncle was pope Clement VII, who died the following year. Now of no diplomatic value, Catherine was treated with contempt at the French court even after her husband's accession as Henry II in 1547. Even so, she gave him ten children before he was killed in a tournament in 1559. She was left with three young boys, who succeeded to the throne as Francis II (1559-60), Charles IX (1560-74) and Henry III (1574-89).

As regent and queen-mother, a woman and with no natural power-base of her own, she faced impossible odds. France was accelerating into chaos, with political faction at court and religious conflict throughout the land. As the country disintegrated, Catherine's overriding concern was for the interests of her children. She was tireless in her efforts to protect her sons' inheritance, and to settle her daughters in advantageous marriages.

But France needed more. Catherine herself was both peace-loving and, in an age of frenzied religious hatred, unbigoted. She tried to use the Huguenots to counterbalance the growing power of the ultra-Catholic Guises but extremism on all sides frustrated her. She was drawn into the violence. Her name is ineradicably associated with its culmination, the Massacre of St Bartholomew (24 August 1572), when thousands of Huguenots were slaughtered in Paris and elsewhere. To this day no-one knows for certain whether Catherine instigated the massacre or not, but here Robert Knecht explores the probabilities in a notably level-headed fashion.

His book is a gripping narrative in its own right. It offers both a lucid exposition of immensely complex events (with their profound imact on the future of France), and also a convincing portrait of its enigmatic central character. In going behind the familiar Black Legend, Professor Knecht does not make the mistake of whitewashing Catherine; but he shows how intractable was her world, and how shifty or intransigent the people with whom she had to deal. For all her flaws, she emerges as a more sympathetic - and, in her pragmatism, more modern - figure than most of her leading contemporaries.

R.J.KNECHT is Emeritus Professor of French History, and Honorary Senior Research Fellow, at the University of Birmingham.